The fog has pathways

I was thinking, walking home this evening, that the season of mists is upon us again here in London.  Then, later, I found myself reading about a proposal for a fleet of sculptures in Santa Monica bay that would harvest fog and turn it into water. Regatta H2O, by Christopher Sjoberg and Ryo Saito, has just won first prize in the biannual Land Art Generator Initiative (LAGI) contest. According to the Smithsonian website, the 'sails are made of mesh, which is veined with troughs to collect fog and transport it to the masts, where it can be piped to storage containers on the shore. When there’s not enough moisture in the air to generate fog, the sails retract for an unobstructed view. The energy needed to operate the pumping and steering mechanisms is wind-generated. At night, extra energy lights up rings that serve as navigational safety markers.'


The photographs of this artwork suggest that the sails would not actually disperse the blanket of water vapour covering the bay.  It would, after all, be a shame to lose our fogs or demystify our mists.  I'm reminded of something Etel Adnan said in an interview with Hans Ulrich Obrest (Etel Adnan in all her Dimensions, 2014), how she regretted that London no longer has its great fogs.  Adnan, whose art and poetry I wrote about earlier this year, has been inspired by the fogs of San Franciso.  ‘I love fog.  The arrival of fog is the coming of a new living being, the entering in the world of an extraordinary event.’  Fogs would come in from the ocean every afternoon around five o’clock. ‘It is not something static, it arrives like a horizontal cascade.  This fog has pathways.  It is stopped by the mountain, and by hills in the East, but it pours and even forms a huge curtain that isolates San Francisco by its surroundings.’  She has even tried to film the fog. In Journey to Mount Tamalpais she says ‘I made a movie, once, of fog, fog, fog.  They said “It’s a study in greys, an abstract movie, a joke!”  It’s none of these things.  It is the fog.’ 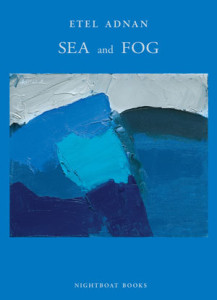