Ten Views from a Thatched Hut 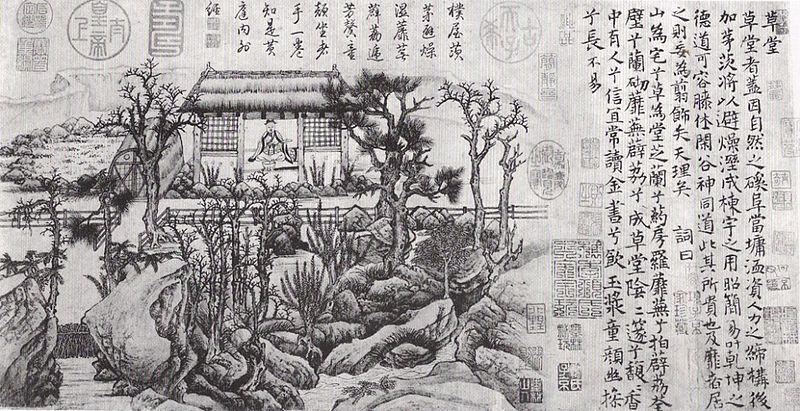 When we look at Chinese landscape paintings, we are seduced not just by their rivers and mountains, but by the idealised life of landscape contemplation they often portray.  The image above is one example, attributed to the Tang dynasty painter Lu Hong.  According to Wu Hung (in Yang Xin et al's Three Thousand Years of Chinese Painting) this work, Ten Views from a Thatched Hut, may be 'the first work in Chinese art history that we could call a scholarly painting, in a style that would dominate Chinese painting after the Song, for its main features are all related to the self-identity of the scholar-artist.'  Wu identifies four characteristics that it shares with later work of this kind:
Lu Hong lived in the early eighth century and is usually bracketed in histories of Chinese art with his contemporary Wang Wei.  Wang was a Buddhist, Lu a Daoist.  It was the Emperor Minghuang who gifted Lu Hong his thatched hut on Mount Song, after Lu had declined the official post of Censor Counsellor.  Lu lived there in scholarly retreat, an ideal I have touched on here in many posts over the last ten years - a dream of poets drawn to nature and solitude in Tang Dynasty China, Augustan Rome, Heian Dynasty Japan, Eighteenth Century Europe and post-War California.
Posted by Plinius at 4:10 pm