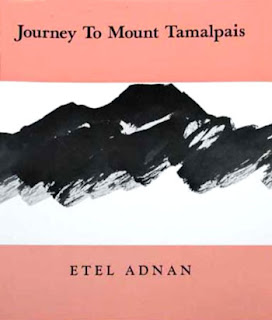 The Journey To Mount Tamalpais took over two decades to write, a slow accumulation of material as Etel Adnan painted, thought and looked each day at the mountain beyond her window.  It was published in 1986 by the Post-Apollo Press, which had been set up a few years earlier by her partner, the artist and writer Simone Fattal.  In Fattal's essay 'On Perception: Etel Adnan’s Visual Art', she describes the book as a philosophical meditation on Nature and Art, which it is, although what I found reading it was that you also gain a wonderful sense of the milieu that gave rise to both the book and Adnan's paintings of the mountain.  Interspersed with her thoughts on perception there are references to the regular artist workshops - 'peaceful parties with the seriousness of children at play' - organised by Ann and Dick O'Hanlan.  It is like reading Gary Snyder, where you remain aware that his writing is set within a wider project of how to live.  In an interview with Brooklyn Rail Fattal says that 'it’s a book that is very important for any person, not only artists, but of course for artists because it’s a meditation on art and its relationship with nature. What you receive from it is this very strong sense of morality and the strength with which you conduct your life.'

Etel Adnan has depicted mountain forms - some more abstract than others - in oils, watercolours and ink.  According to Fattal, ‘the natural pyramidal shape of the mountain became embedded in her whole being. It became her identity.  She could draw it while in Lebanon, at night and at dawn; the mountain was for her the ever-revealing mystery, the ongoing manifestation.’  The leporello above can be seen at the wonderful exhibition of her art now on at the new Serpentine Sackler Gallery.  In an interview with co-curator Hans Ulrich Obrest, Adnan said that coming upon this format gave her 'a good way to get out of the page as a square or a rectangle; it was like writing a river.’  Obrest is a great admirer of Adnan's art and writings, which he first encountered in the form of one of these Japanese folding books.  He has said (in the catalogue for an earlier show, Etel Adnan in all her Dimensions) that he then sat down to read her novel Sitt Marie Rose (1977) and before long found himself addicted – the first time he had felt that way since high school when he had tried to read every single word Robert Walser ever wrote.

Adnan and Fattal now live in Paris.  Their apartment is described in a recent Wall Street Journal article which gives a good overview of her life and relatively recent fame.  There, 'when her painting is done, she might sit down to work on any number of projects in progress—a tapestry, a book of poems, a film, an opera.'  Adnan can no longer travel to California but carries the memory of the mountain with her.  She told Obrist that ‘Mount Tamalpais represents all mountains, all the dimensions of America in my head.’  Here is how The Journey to Mount Tamalpais ends


‘In this unending universe Tamalpais is a miraculous thing, the miracle of matter itself: something we can single out, the pyramid of our own identity.  We are, because it is stable and it is ever changing.  Our identity is the series of the mountain’s becomings, our peace is its stubborn existence.'