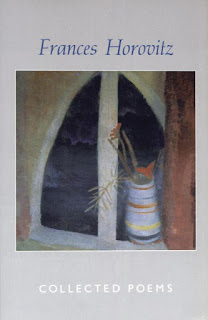 The Collected Poems of Frances Horovitz only runs to 118 poems but many are centred on the natural world and the landscapes of Cumbria, the Welsh Marches and the Cotswolds, where she lived for ten years across the valley from the white-roofed cottage that inspired Laurie Lee's Cider with Rosie.  Here are some brief examples of her imagistic writing, from the poems 'Irthing Valley' 'Finding a Sheep's Skull', 'Walking in Autumn' and 'Sightings':


In a 1984 review of her short posthumous collection Snow Light, Water Light Peter Levi wrote that she had 'perfect rhythm, great delicacy and a rather Chinese and yet very locally British sense of landscape. (I take 'Chinese' to imply high praise).  Her last poems show a healthy influence of Basil Bunting, and of the landscape of Birdoswald and Hadrian's Wall.  She has a thrilling sense of history and archaeology. ... She does in a small degree what David Jones has done, who was the wizard of this age.'  Levi might have been thinking here of a poem I particularly like, 'An Old Man Remembers', which retells the Mabinogian story of a beautiful woman, Blodeuedd, who was formed out of 'the flowers of the oak, the broom and the meadowsweet' but ends her days transformed into an owl.

Levi goes on to quote in full an atmospheric short poem entitled 'The Crooked Glen' - a translation of 'Camboglana', the Celtic name for Birdoswald.  Camboglana has been identified as one of three possible sites for Arthur's last battle, after which, mortally wounded, the king asked Sir Bedevere to take Excalibur back to the waters whence it came.

(I saw this scene recreated a couple of years ago when my son took the role of King Arthur in his school play and other children shook a sheet of blue plastic to simulate the waves on the water).  Bedevere's words on his return,  I saw nothing but waves and winds, are the first line of 'The Crooked Glen'.  Horovitz writes of an ushering wind shaking ash and alder by the puckered river and stirring the blood-dark berries.

In October 1983, Frances Horovitz died - she was just forty-five years old.  I find some of her final poems almost too poignant to read, like 'For Adam, nearly twelve' and 'Letter to My Son' (my own son is now twelve; Adam Horovitz grew up to become a poet himself).  Her last poem, a haiku, reminded me, sadly, of the late poems of Masaoka Shiki (described here previously) who died even younger, at thirty-four.  A disciple of Shiki's had glass installed in the sliding doors of his room, so that he was able to see out into his garden.  Frances Horovitz could see Garway Hill through the window by her bed, but in 'Orcop Haiku' it is glimpsed through September rain, 'glass beads flung on glass'.  In an obituary in Poetry Review Anne Stevenson observed that 'the fine poems of her last collection, Snow Light, Water Light, forecast her own death in the images of light and dark, water and stone, she always made her own. We who loved her miss her very much. But everyone inherits these poems which, like Hardy's and Edward Thomas's, will outlast all fluctuations of fashion.' 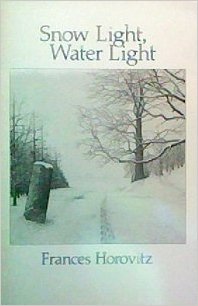