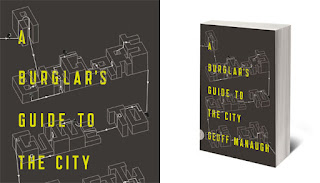 I have been reading A Burglar's Guide to the City by BLDGBLOG's Geoff Manaugh which has interesting things to say about buildings, street patterns and the way urban space is used.  With its focus on illegally entering enclosed structures there is little directly about 'landscape', although I did learn that a popular lock picking tool is a kind of landscape in miniature: the Bogotá rake, 'named because its waves and bends apparently resemble the mountains surrounding Bogotá, Columbia, where the tool was invented.'  Also that there is a thorny plant, trifoliate orange, popular with security conscious landscape designers because it 'is so dense and fast-growing that it can stop speeding vehicles; it is used by the U.S. military to help secure the perimeters of missile silos and armories.'  And that there was a burglar in Oregon


'who dressed up in a ghillie suit, a tangled mass of fake vegetation woven into nets, originally meant to camouflage military snipers by making them indistinguishable from plant life.  Disguised as a plant, he then slipped into his target, which, of all things - because you couldn't make this up, it would be impossible to take seriously in a work of fiction - was a museum of rocks and minerals.  He was after their gold and gemstones.  Simulating one kind of landscape, he broke into a museum of another...' 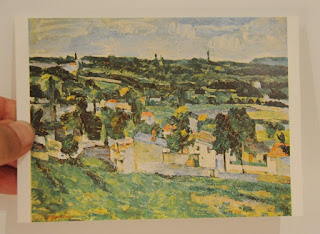 Stories like this got me thinking about landscape art in a different way, as a target for burglary. A Cézanne painting, View of Auvers-sur-Oise (c. 1879-82) that I've always liked (the postcard I'm holding above was purchased just after I did my A-levels) can no longer be seen because it was stolen on millennium night.  Here's how The Guardian reported the burglary on 3 January 2000.


'The theft of a £3m painting by Paul Cézanne in Oxford on millennium night was carried out by a professional burglar who created a smokescreen to foil security cameras, it was disclosed yesterday.  With the noise of his break-in masked by celebratory fireworks, the burglar cut a hole in the roof of the Ashmolean museum and descended to its art gallery by rope ladder.  He had a holdall containing a scalpel, tape, gloves, a smoke canister and a small fan. He set off the canister, and used the fan to spread the smoke and obscure the view of the gallery's closed circuit cameras. In less than 10 minutes, he had seized the painting, View of Auvers-sur-Oise, climbed up the ladder, and gone.'

There are apparently suspicions that this painting was stolen to order by a collector, obviously not a person to be satisfied with an Ashmolean Museum postcard.  Fortunately art thefts are too rare to consider any prevailing aesthetic in the landscapes targetted.  There's the painting that gave a name to an art movement - Monet's Impression, soleil levant - stolen in Paris by a yakuza gangster; Nebelschwaden by Caspar David Friedrich, taken along with two Turners by thieves who had hidden overnight in a Hamburg gallery; Govaert Flinck's Landscape with an Obelisk, lifted along with other Dutch masterpieces in Boston by a gang dressed up as policemen (one wearing a fake wax mustache); and Marine by Claude Monet, owned by a museum in Rio de Janeiro, which disappeared with its burglars into the carnival crowd, melting into the city like the thief who got away with his Cézanne while millennium fireworks created the perfect diversion.

I will end here with a quote from A Burglar's Guide to the City concerning the role of architecture in a theft involving two more Monet paintings.  The following paragraph is reprinted on the Fast Company website:


'One of the most spectacular art heists of the last decade is thought to have succeeded precisely because of a flaw in a museum’s architectural design, which inadvertently allowed the general public to study the internal patterns of the security guards and visitors. The Kunsthal in Rotterdam, designed by Rem Koolhaas’s firm OMA, was robbed in the middle of the night back in October 2012; seven paintings were stolen, including works by Matisse, Gauguin, Monet, and Picasso. Ton Cremers, founder of the Museum Security Network, an online forum, put some of the blame for this on the building itself: the museum’s expansive floor-to-ceiling windows offered a clear and unobstructed view of many of the paintings hanging inside. More important, they also allowed a constant, real-time surveillance of the internal workings of the museum for anyone passing by—the patterns of visitors and the comings and goings of the guards were effectively on public display. Thus thieves could have sat outside in a nearby park, watching until they found the right moment to strike. The museum had its own internal rhythm of events that the burglars interrupted with a perfectly timed counter-event: the heist. This is the rhythmic spacetime of burglary.'