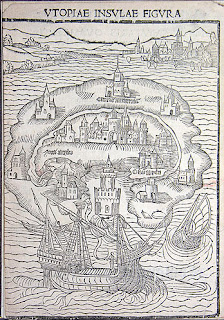 Ambrosius Holbein, The Island of Utopia, 1516

2016 marks the five hundredth anniversary of Thomas More's Utopia.  The book has little in detail to say about Utopia's topography, although we are told that it was once a peninsula, before a channel was cut through the isthmus connecting it to the mainland, creating a crescent shaped island that is like one great harbour.  The land itself is not especially fertile but the Utopians make good use of their natural resources and enjoy their communal gardens.  In his introduction to the Penguin translation Paul Turner provides an amusing overview of utopian and dystopian literature, from the vision of paradise in The Epic of Gilgamesh  to recent novels by Huxley, Orwell, Evelyn Waugh and Mary McCarthy.  More's chief model was Plato's Republic, in which Socrates describes his ideal state.  It is in Plato's Critias however, that he imagines an actual location for a utopian society: the island of Atlantis, formed of concentric rings with springs that provide both hot and cold water.  Before Plato, Paradise was imagined in the form of Elysium, which Homer located on the western edge of Earth. Turner writes that in The Odyssey 'the description of the Elysian Fields stresses chiefly the superb weather-conditions; but Lucian, completing the picture later, represents Elysium as a luxurious holiday-camp, with honey and scent laid on, permanent background music provided by nightingales, and self-filling wine glasses.'

Ambrosius Holbein, The Island of Utopia, 1518

The first edition of Utopia came with a sketch-map of the island by Hans Holbein's elder brother Ambrosius.  However a slightly different version appeared in 1518, within a book devoted to the work of More and Erasmus that had engravings by both of the Holbeins.  In this new version the ship's position in relation to the island makes it resemble a skull, slightly reminiscent of the famous anamorphic skull in Hans Holbein's The Ambassadors.  There is an interesting article on this in the British Dental Journal which suggests that Erasmus may have suggested a memento mori design as a pun on More's name.  At first I thought special dental techniques had been used in this research and that there might have been something uniquely interesting about the 'ship of teeth'.  However, the article is actually an excursion into art history by a practising dentist whose 'experience in dental radiology' heightened his perception of concealed anatomical structures.  It is a striking idea that the particular viewpoint dentists habitually have of our upturned faces may lead them to read landscapes differently (not what Woody Allen had in mind I think when he wrote 'If the Impressionists Had Been Dentists').  The Utopians may have had need of dentists, as their meals ended with a great variety of sweets and fruits.  Dentists are not mentioned explicitly but Utopia has a plentiful supply of medical equipment, experienced doctors and sympathetic nurses, so that 'practically everyone would rather be ill in hospitals than at home.'
Posted by Plinius at 12:22 pm

Email ThisBlogThis!Share to TwitterShare to FacebookShare to Pinterest
Labels: maps, the body