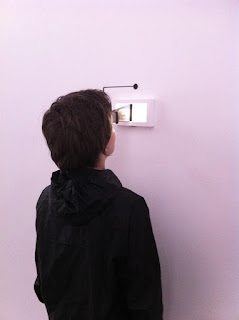 
'In Towers, large-scale follies or telescopic structures sit within vast, featureless landscapes, as if suspended between heaven and earth, while Stations depict seemingly free-floating spheres, reminiscent of celestial bodies: the sun, moon and planets. Closer investigation of the images reveals ropes, scaffolding and smoke referencing their construction. The exhibition centrepiece is an observatory-style architectural structure, offering a selection of stereoscopic cloud studies.'

Goudal has been identified as part of a group of younger photographers 'choosing to foreground the formerly ‘repressed’ aspects of the medium', i.e. the physical means and technical processes necessary to create an image. The apparatus required to keep her spheres in place comes over though as more than just a reaction to photoshop and a means of focusing attention on the actions of the artist.  It gives the Stations photographs a mysterious quality, as we wonder what purpose they serve - are they remnants of some installation or performance, or envirographic instruments of the kind imagined by the British Exploratory Land Archive? As she says in the interview embedded below, the work is partly based on early astronomers like Copernicus and the instruments they might have used.  The gallery's central observatory like-structure with its stereoscopic viewers provides a way to imagine studying the form of clouds before the invention of the telescope.


The exhibition includes one Stations photograph that takes up a whole wall.  Watching my son walking up to this it looked as if he was on a stage set, and then as if he might enter the imaginary space.  In a short essay on the artist's work Marta Gili sees her images in terms of an emptying of the landscape. 'As in the theatre of The Absurd it could be said that here nature is represented in order to be vacated, like a stage ultimately intended to be inhabited by other sets, which are in turn nothing other than masks of something that might have been or might have taken place in another time, past or future, or another place, near-at-hand or far off.'  This theatrical element is echoed by Bernard Marcelis who writes of the way Goudal has chosen to situate her constructions in caves and islands, places that are 'imbued with a certain dramaturgy, or at least are propitious to reconstructions or particular mises en scenes'.  In a third essay reprinted on the artist's website, Sebastien Montabonel and Emma Lewis relate her imagined spaces to Foucault's notion of heterotopias. 'Building a stage on which our imaginations can play out, a narrative in which we are protagonists, Goudal’s images brings us, as viewers, back to ourselves.'
Posted by Plinius at 11:30 am