An image of the sun

To not look at the sea, but over it.
In winter, not at the tree, but through it.
With art, not to look at or through but with it.

These lines appear in one of the short essays and appreciations collected together in a new book, Between the Lines: The Work and Teaching of Roger Ackling.  They suggest why Ackling rarely discussed his own work: 'not to look at or through but with it'.  However, he was persuaded to give a talk as part of a 2002 residency at Morai in Hokkaido, from which the quote above is taken.  One of the organisers, Toshio Nakamoro, recalls the beach there having 'all the elements Roger needed - clear and intensive sunlight, water and air' and Ackling told his audience that the melancholy, remote beauty of this place had impressed him greatly.  He had become a regular visitor to Japan, where his meditative approach to art has always been appreciated - in 1986 the Acklings chose to celebrate their wedding at the Meiji shrine in Tokyo.  The talk ended with him modestly admitting that he still did not necessarily know what he was doing.  He described the means by which he had been making sculpture for nearly thirty years: pieces of wood, found by the sea's edge and then burned with a magnifying glass.  How long this took would depend on cloud cover, the time of day and year, the altitude and the age of the wood.  'I usually work from left to right and against the grain.  Each line is made up of many black dots.  Each dot is an image of the sun.'

Between the Lines includes many contributions from Japan, along with reminiscences by his fellow British artists Richard Long, Hamish Fulton and Thomas A. Clark.  There is a short piece by Evan Parker, whose album Lines Burnt in Light (2001) refers to Ackling's work.  Former Tate curator Judith Collins contributes the transcript of an interview she did for a BBC Radio 3 programme, Artists and the Landscape, in January 1994.  For this she travelled to the Norfolk coast, where the Acklings lived in a coastguard cottage on an eroding cliff.  'Ackling worked on the beach in front of his cottage, in the shifting space between land and sea.  But his sculptures were actually made in the 93 million miles of space between the sun and the piece of found driftwood he held in his hand.'  On winter days like the one on which they met for this interview, it was not possible for Ackling to make his work as the light was too weak.  But this enforced break meant he could return to it refreshed each year in April. 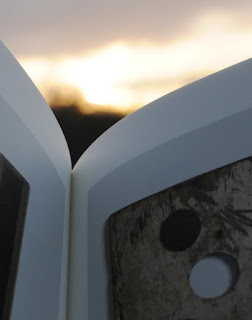 Reading Between the Lines in weak winter sunlight

As ever here, I have been focusing on landscape and art, but Ackling did not see himself as a land artist and the later sections of the book on his teaching practice illustrate how open he always was to new ideas.  In a catalogue essay from 1997, Sylvia Ackling explained that


'he still identifies strongly with the more abstract elements: ideas of remoteness and isolation, an art that is not necessarily object-based, a lack of respect for a hierarchy of materials fixed by commercial values.  However, although his fellow Saint Martin's students Hamish Fulton and Richard Long continue to be important influences, together with Dada and Carl Andre, he also looks to the work of Alan Charlton and Peter Joseph, and to that of the sixteenth-century Japanese sculptor Enku.  Increasingly, Roger finds inspiration in Enku's work, the Buddhist monk whose life was a journey as he walked from temple to temple throughout Japan in his quest to carve one hundred thousand buddhas...'