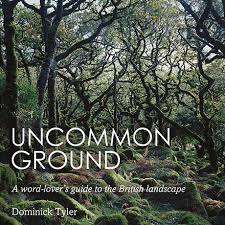 A few weeks ago, on leaving the job I had done for six years, I was gifted a copy of Dominick Tyler's Uncommon Ground.  It combines attractive photographs with short descriptions of some of the words that have been used for British landscape features, partly inspired, like Robert Macfarlane's Landmarks, by the Barry Lopez/Debra Gwartney collection Home Ground. There are some intriguingly obscure words here like 'fraon', a place of shelter in the mountains, which Tyler found in a couple of early eighteenth century Gaelic dictionaries.  But many will be familiar from school geography lessons: tor, meander, blowhole, clint and gryke.  As I remember it the standard geographical terms were taught rather than local British variants: arête rather than druim or aonach.  However in one case I do recall being offered three interchangeable terms - cirque, cwm and corrie - as there seemed to be no collective agreement on what to call these glacial basins.  Tyler groups these under the word 'coire' - the Gaelic original of 'corrie'.  He says coombes are the same thing too which I don't think my geography teacher would quite have agreed with (we had lots of coombes in periglacial Sussex).  The one that Edward Thomas described in his poem 'The Combe', 'dark, ancient and dark', would have been quite difficult to photograph for Uncommon Ground: 'The sun of Winter, / The moon of Summer, and all the singing birds / Except the missel-thrush that loves juniper, /Are quite shut out.'

Uncommon Ground quotes sparingly from writers, but there are three lines from Milton's 'Comus' that mention both 'dingle' and 'dell': 'I know each lane, and every alley green / Dingle or bushy dell of this wilde Wood, / And every bosky bourn from side to side.'  The photograph accompanying this text shows Bunyan's Dell in Hertfordshire, where a large congregation of non-conformists once gathered 'under the canopy of heaven' to hear John Bunyan preach.  Milton's word 'bosky', referring to a thicket of trees, 'was also a word for a state of mild inebriation, perhaps drawing a parallel between a confusion of mind and a tangle of branches.'  I can't find any of these terms in the Landmarks glossaries, which suggests there is less overlap between the two books than you might think.  Robert Macfarlane is happy to admit words coined by poets, most notably Gerard Manley Hopkins, whose poems include: 'twindle' - stream foam dividing into two braids;  'heavengravel' - hailstones, and in the same line of poetry 'wolfsnow' for a sea-blizzard; 'slogger' - the sucking sound made by a waves against the side of a boat; 'shadowtackle' - the shifting patterns of shadow on woodland floors; 'leafmeal' which evokes the way leaves fall one by one and then lie like ground grain, 'silk-ash' - the fine ash covering glowing embers; and 'doomfire', an apocalyptic sunset.


Uncommon Ground starts with a local word, 'zawn', derived from a Cornish word for a chasm, but reading it through you keep coming across connections with other languages and landscapes.  'Shiver', the Cumbrian term for a fragment of slate derives from the Germanic word for splinter, 'scivero', which in turn, 'in a nice little etymological loop', led to the modern German 'schiefer', slate.  It is pleasing to learn that the Russian word 'Zastrugi' which gives us the name for ridges in snow formed by the wind also means 'the splintering of planed wood against the grain' and 'the undercut bank of a stream' (although even more pleasing would be to learn that Russian has two additional words for these precise phenomena).  This kind of thing made me want to see the global glossary of landscape terms being slowly compiled, according to Robert Macfarlane, by the Arabic scholar Abdal Hamid Fitzwilliam-Hall.  It has occurred to me that this Borgesian encyclopedia may prove insufficiently ambitious if it excludes the rimae, catena and dorsa of the Moon, or the words that will be needed to describe detailed features or atmospheric effects elsewhere in the solar system.  But I suppose I am betraying here my urban sensibility, where the daily experience of nature can seem as remote as those planetary features discerned in telescopes and given Latin names before anyone has been able to experience them.
Posted by Plinius at 10:30 pm

This week, in the "Süddeutsche Zeitung Magazin" (German), a article was published about Simon Abdāl Hamīd Fitzwilliam-Hall. He had a blog called "fen-edge encounters". You might find that interesting.