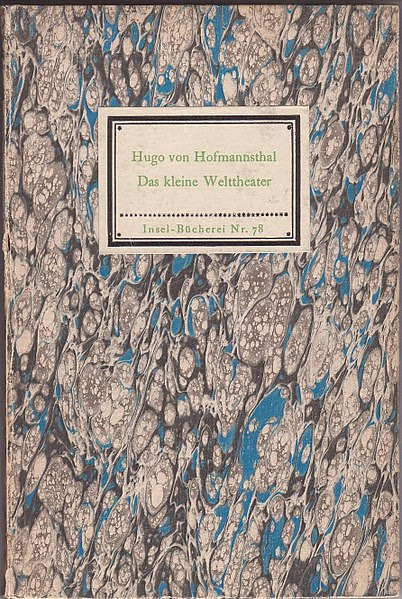 In October 1899 a new journal appeared in Germany called Die Insel, 'The Island' and carried four poems by an interesting new writer, Robert Walser (I discussed Walser's poetry here last year).  The magazine only lasted two years but gave rise to a publishing company, Insel-Verlag.  In 1912 they launched a series of distinctively designed short books with Rilke's The Lay of the Love and Death of Cornet Christoph Rilke.  Over time this Island Library series evolved and diversified, introducing marble paper covers, for example, in 1927 (above).  It was these books that inspired the King Penguins which were published over a twenty year period from 1939, eventually comprising 76 volumes.  The first one was on the subject of British birds and many of them focused on aspects of nature or art: roses, shells, mosses, moths, fungi (one volume on the edible kind, another on the poisonous), Egyptian paintings, Greek terracotta, Dürer woodcuts, the medieval carvings of Exeter cathedral and so on.  A few were rather quirky topographical studies: A Prospect of Wales (1948) with text by Gwyn Jones and illustrations by Kenneth Rowntree, The Isle of Wight by Barbara Jones (1950 - one illustration depicted a topiary boat), and Romney Marsh (1950), illustrated and described by John Piper. 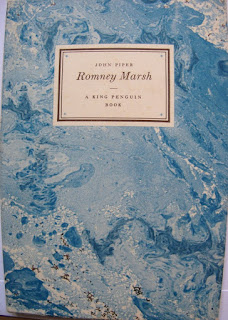 Romney Marsh begins by quoting four ‘Earlier Views’: an 1879 address by the Bishop of Dover to the Kent Archaeological  Society, an extract from George Clinch’s Memorials of Old Kent (1907), another from Basil Champneys' A Quiet Corner of England (1875) and this, from an autobiographical article written by Paul Nash c. 1940:

‘I have stayed at Romney Marsh and have watched the eastern sky darken across the dyked flats to Dymchurch and the Channel towards the French coast as the sun sat at my back, and have noticed the strange unity of sea, sky and earth that grows unnoticed at this time and place.’

There is nothing quite as poetic as this in Piper's book, but there are occasional reminders that the author is a painter (‘water lies in light-coloured snatches and loops that reflect a winter sky'...) Mainly however he combines visual description with factual information: 'in winter the reeds still blow in the dykes, showing a pale-yellow flank of close stalks with feathery crowns of grey or purple-black fronds, and there are pea-stacks, built on a tripod of sticks for aeration, as well as the many dyke-side potato and swede clamps.’  The main text is followed by some 'Notes on the Churches of the Marsh and the Cliff' (St Mary Marsh church is said to resemble 'a rural Norfolk church as drawn by Cotman.')  But all this is a prelude to the book's sixteen colour prints, showing a sequence of churches and landscapes (I say 'colour', but they are almost all done in an austerity palette of grey, browns and camouflage green).  You can see a few of them along with Piper's preparatory sketches in the video I have embedded below.  At one point its narrator, admiring the interior of Old Romney church, which Piper painted and described, is apparently caught by surprise when Sir Donald Sinden suddenly appears from behind a curtain, with a copy of the King Penguin in his pocket.  "You've got one of these haven't you?" he says. "I have indeed, wonderful!" she replies.
Posted by Plinius at 10:26 pm

A little googling reveals that the narrator is an art historian Libby Horner, and that the "Sinden surprise" was rather manufactured:

Thanks for looking that up Mike. I'm not sure subtlety has ever been Sir Donald's forte! On Spitting Image his puppet asked a waiter "Do you serve a ham salad?" and received the reply "Yes, we serve salad to anyone".

Sounds like Libby Horner endured nasty weather, but then pretty much every Piper painting in 'Romney Marsh' has his trademark glowering grey skies. As I mentioned in an earlier post, when George VI saw the drawings of Windsor he apparently said "You seem to have very bad luck with your weather, Mr. Piper."