"I need not tell you what terrible distress the war is causing among artists", Sir Kenneth Clark, Director of the National Gallery, wrote to an official at the Ministry of Labour in October 1939.  "The situation is so serious that I have been wondering if it would not be desirable for the Government to take some action."  The result was Recording Britain , a project that eventually comprised more than 1500 paintings and drawings, some commissioned from leading lights of the Royal Watercolour Society others by new artists who were paid a small fee for each painting accepted.  As the V&A who own the collection explain, 'Recording Britain was intended to boost national morale by celebrating the country’s natural beauty and architectural heritage, but it was also a memorial to the war effort itself. The earliest pictures show the landscapes of southern England which were under immediate threat from bomb damage and invasion; in due course the remit was expanded to include those landscapes, buildings and ways of life that were vulnerable to the destructive forces of ‘progress’ – urban expansion, housing developments, road-building and so on.' 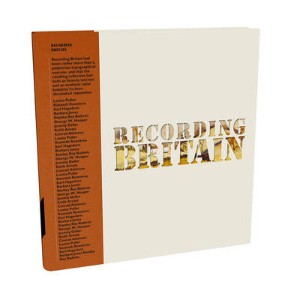 Why isn't the art of Recording Britain better known?  As Gill Saunders writes in her introduction to the V&A's book Recording Britain, received opinion was that the venture was 'characterized by monotonous mediocrity'.  When she first looked at the collection in the early 1980s the pictures seemed 'muddy or washed-out, second rate, and in their brittle yellowing card mounts, they gave off an air of neglect.'  The only catalogue was 'a shabby typescript on cheap paper bound in the ubiquitous dark blue of Her Majesty's Stationary Office.'  The emphasis on 'recording' meant that more experimental landscape painting was out and although Clark favoured the neo-Romantic artists and secured the involvement of John Piper, the rest of the committee had conservative tastes.  Nevertheless, Gill Saunders writes of finding among the dross some 'thrilling revelations': paintings by Piper, Kenneth Rowntree, Stanley Badmin, Barbara Jones, Enid Marx, Michael Rothenstein, Phylis Dimond, Charles Knight and William Russell Flint (whose rather abstract watercolours a Times reviewer of the first Recording Britain exhibition felt 'perhaps come nearer to landscape than to true topography.')  You can view these on the V&A site.

Another problem with Recording Britain, as Charles Hind explains in his essay 'Recording Britain: Architecture', is that it left large parts of the country unrecorded. In particular, it was 'woefully inadequate in terms of buildings and landscapes that were destroyed or damaged in the war ... Virtually none of the towns and cities targeted by the Luftwaffe during the Baedecker Raids was considered worthy of inclusion, and those that were got only the scantiest coverage ... German radio announced on 4 May [1942]: 'Exeter was a jewel.  We have destroyed it.'  Pevsner recorded that the German bombers 'found Exeter primarily a medieval city, they left it primarily a Georgian and early Victorian city.'  Recording Britain is of little help here in providing images of the lost urban fabric.'  In contrast, 63 paintings were made in the Kingston-Petersham-Richmond-Kew area but these areas have never been under threat, remaining 'in demand for those wealthy enough to want rural amenities within a short car drive of London, and all survive.'  Although Recording Britain provided 'a swansong to the great tradition of English topographical watercolours, the task of recording the vanishing architectural heritage of England belonged to photographers rather than painters.'
Posted by Plinius at 11:32 am