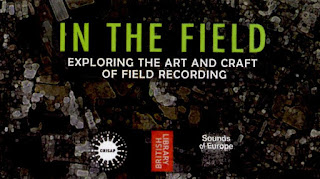 I spent Friday and Saturday at In The Field, a symposium on the art and craft of field recording. During the two days we heard about a diversity of methods - from undersea hydrophone recordings made by Jana Winderen to impressions of the Hong Kong soundscape written for Salomé Voegelin's Soundwords project - and approaches ranging from the collective educational audio projects Claudia Wegener develops in Africa to the solo expeditions made by Simon Elliott to capture the intimate sounds of ospreys and peregrines.  Chris Watson came along briefly to talk about an installation he created at the London Children's Hospital in which patients remixed recordings he made on each of the seven continents.  He also mentioned In Britten's Footsteps, a collaboration with cellist Oliver Coates performed at Aldeburgh last week, which involved 'twenty speakers, split between the floor, head height and ceiling, developed to give an accurate spatial representation of the environment in which Watson had recorded the sounds' (The Liminal).  I think the weekend's highlight for me was a presentation by Christina Kubisch, whose Electrical Walks I wrote about here in 2010.  A recording she played of the beats made by different security gates sounded like the kind of music Chris Watson was making with Cabaret Voltaire all those years ago.

The most relevant talks from a landscape perspective were those that dealt with sound mapping, a subject I wrote about here last year, following a Wire Salon.  That event featured Ian Rawes, who modestly took on the job at this symposium of roving microphone holder, a role he could be seen as holding for the city itself in his work compiling the London Sound Survey.

The Guardian's interactive view from the top of the Shard

Finally I should mention that In the Field is also the title of a new book of interviews with field recordists, edited by Cathy Lane and Angus Carlyle, who co-organised the weekend's event with Cheryl Tipp.  I may have more to say about this in a future post.
Posted by Plinius at 8:59 am