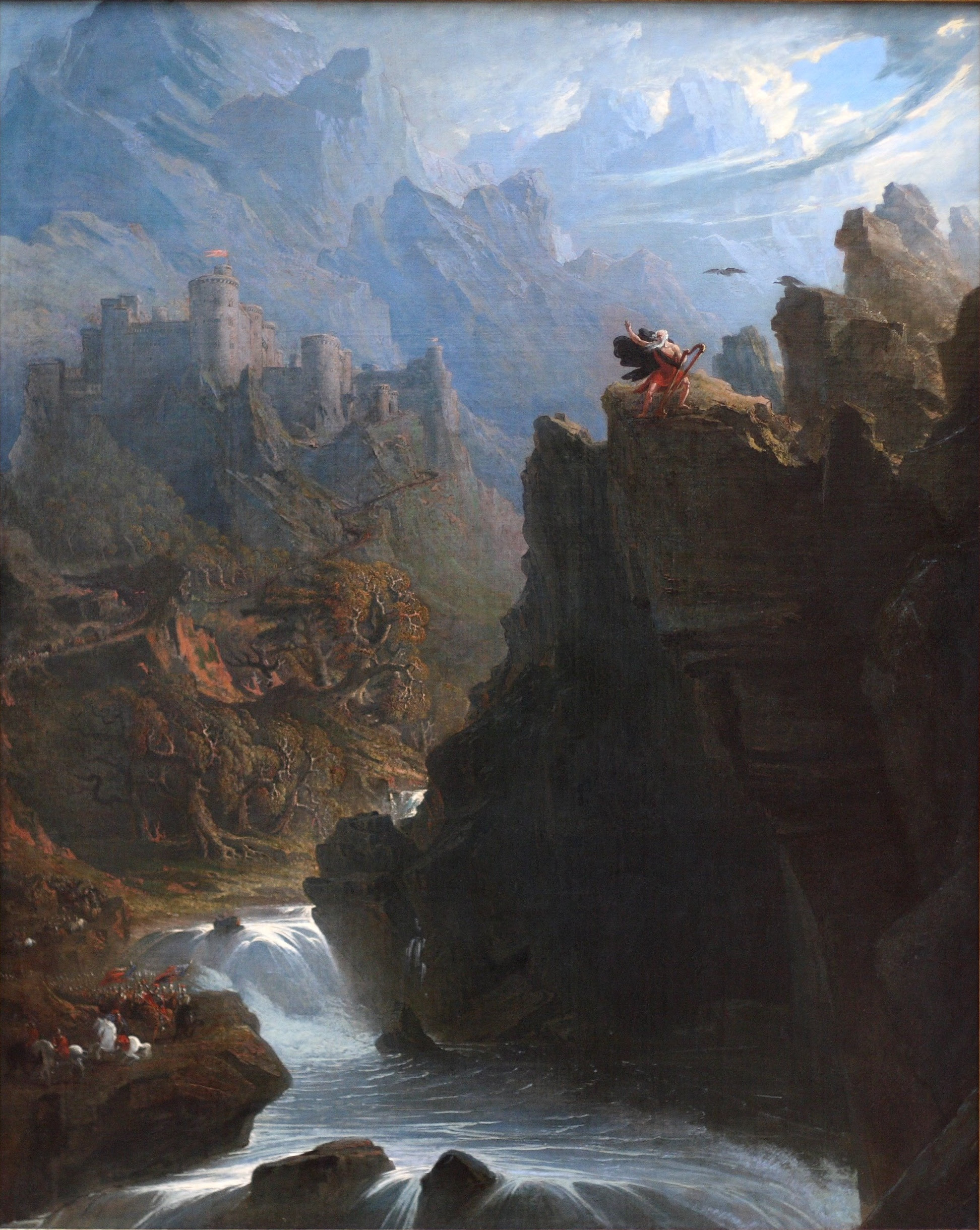 As the Tate Britain exhibition John Martin: Apocalypse comes to the end of its run, it would be interesting to know how well it has done.  There was talk beforehand of the way that Martin's critical reputation has risen and that his spectacular paintings should appeal in a world of 'proliferating IMAX cinemas and giant plasmas' (Ian Christie in Tate Etc. magazine) and contemporary photography framed on a Sublime scale - Edward Burtynsky, Florian Maier-Aichen, Andreas Gursky (Jonathan Griffin also in Tate Etc.)  The Tate's familiar Last Judgement Triptych was accompanied by a new 'theatrical display' intended to evoke the way these paintings were seen around the world in the late nineteenth century.  Looking round the exhibition I found it easy to see why John Martin's work has been mocked - "huge, queer and tawdry" was the verdict of William Makepeace Thackeray.

Martin's shortcomings are more evident when you see the paintings up close: The Bard for example often gets reproduced in books about Romanticism but I'd not previously been able to see how unconvincing some of its details are - Edward I's army a line of little tin soldiers trailing all the way back to the castle gate.  Yet there's still something awesome about these blockbuster paintings (at least that's what the adolescent Chris Foss fan I used to be was telling me) and the exhibition was also fascinating for the way it highlighted Martin's less well known activities - as a decorator of plates, an illustrator of prehistoric creatures (Gideon Mantell's The Wonders of Geology) and a painter of modest topographical water colours, like some views of Richmond Park where, like Edmund Spenser in Ireland, he had an oak tree named after him (how many writers and artists are commemorated in this way I wonder?)

Perhaps the most surprising exhibits were two examples of his schemes to improve the city of London.  The first, which might have been drawn by a 1970s land artist or a 1990s psychogeographer, was his plan for a London Connecting Railway - a beautiful curving form superimposed on a map, like the outline of an octopus.   The other was a drawing of a sewer housed in a new Thames embankment, stretching from 'the Ranelagh Outlet to the Engine Station': a proposal considered seriously at the time but easy to view as one more facet of Martin's capacity to dream up imaginary cities. (It made me think of today's urban explorers, uncovering tunnels like these and scaling buildings to view the city below from a John Martin perspective.)  An excellent article in The Guardian by the John Martin expert William Feaver mentions these engineering projects and claims that Martin 'was ecologically prophetic. In his 1833 A Plan for Improving the Air and Water of the Metropolis he raised an issue such as had been dismissed by the scoffers who ignored divine warnings and were swept away in Noah's flood: "Is it not probable that a too ignorant waste of manure has caused the richest and most fertile countries such as Egypt, Assyria, the Holy Land, the South of Italy etc to become barren as they now are?"' 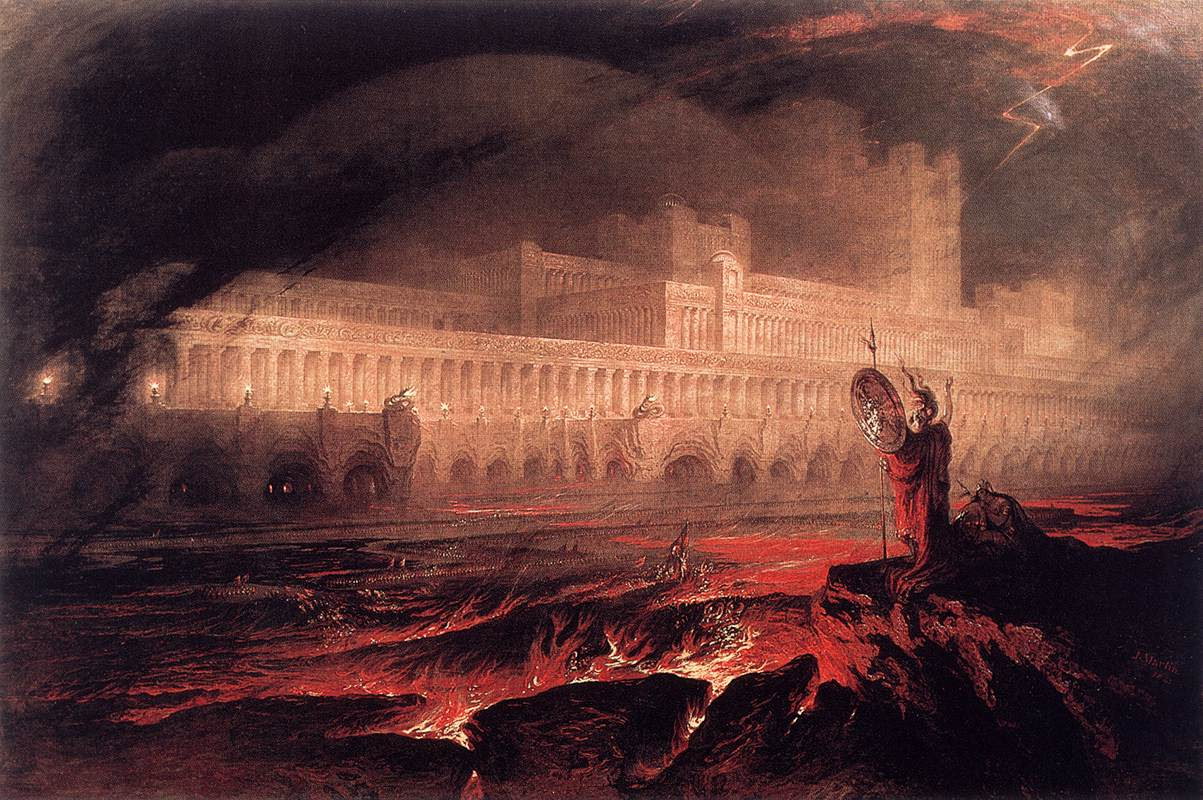 The Bard
As an admirer of both Edward I and Thomas Gray, I have long wanted to see John Martin’s depiction of The Bard. It was almost the first painting in the exhibition and , although I was impressed by its size and grandeur, I too was a bit disappointed. Amongst the tin soldiers you mention, where was ‘Stout Gloucester’ also known as Gilbert the Red? And I could not see Mortimer couching his quivering lance, let alone sense him crying ‘To arms’.
Incidentally why did Thomas Gray not refer to his almost namesake, Grey, ie Reginald de Grey, one of Edward I’s most prominent and effective barons in the conquest of Wales?

Thanks. To save people looking it up here are the opening lines of Thomas Gray's poem:

"Ruin seize thee, ruthless King!
Confusion on thy banners wait!
Tho' fanned by Conquest's crimson wing,
They mock the air with idle state.
Helm, nor hauberk's twisted mail,
Nor e'en thy virtues, Tyrant, shall avail
To save thy secret soul from nightly fears,
From Cambria's curse, from Cambria's tears!"
Such were the sounds that o'er the crested pride
Of the first Edward scattered wild dismay,
As down the steep of Snowdon's shaggy side
He wound with toilsome march his long array.
Stout Glo'ster stood aghast in speechless trance:
"To arms!" cried Mortimer, and couched his quiv'ring lance.

On a rock, whose haughty brow
Frowns o'er cold Conway's foaming flood,
Robed in the sable garb of woe
With haggard eyes the Poet stood;
(Loose his beard and hoary hair
Streamed like a meteor to the troubled air)
And with a master's hand, and prophet's fire,
Struck the deep sorrows of his lyre...

I think that parts of the landscape in the painting inspired Henry Holiday when he illustrated Lewis Carroll's "The Hunting of the Snark": http://www.flickr.com/photos/bonnetmaker/8257165401/.