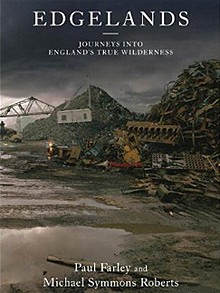 The Fitzwilliam museum in Cambridge is going to mount a small exhibition later this year, showing prints by two of the artists mentioned in Paul Farley and Michael Symmons Roberts' book Edgelands. 'George Shaw's series, Twelve Short Walks, 2005, is drawn from revisited scenes of his childhood on the Tile Hill council estate in the suburbs of Coventry. Michael Landy's Nourishment, 2002, features life-sized images of weeds, or 'street-flowers' - the overlooked and neglected vegetation of Edgelands.'  Shaw's Humbrol-painted views (which made him the favourite to win last year's Turner Prize) and Landy's equally painstaking illustrations of groundsel, toadflax and thale cress represent two different approaches to the edgelands - one an attempt to depict the visual experience of these elusive, marginal spaces, the other an investigation into a particular defining feature: electricity pylons, cooling towers, sheds, containers, litter.

Among the artists who, like George Shaw, convey a sense of the actual landscape, there is David Rayson, who has executed a set of canal path paintings, From Ashmore Park to Wednesfield, where 'there are no people about, just their traces in the old leaden water, the missing railing, the litter...'  Then there are the motorway verges that Edward Chell has made the focus for his paintings, even going so far as to exhibit them in Little Chefs.  And there are the photographs Keith Arnatt made after leaving behind performance art in the early seventies: Abandoned Landscapes, A.O.N.B., The Forest.  In the tradition of Samuel Palmer's detailed jewel-like images, Arnatt has made a series of 'polythene Palmers' - colour images of a rubbish-strewn path, Miss Grace's Lane.  But unsurprisingly it is easier to name artists who have chosen to isolate details, like Michael Landy's weeds, than show a wider prospect, since the edgelands tend to fail to live up to even our post-industrial ideas of the picturesque.

Of course some parts of the edgelands have themselves been landscaped, as Farley and Symmons Roberts observe of a new university campus and various retail sites and housing estates.  They visit an East Midlands business park where 'shrubs and flowers don't just decorate perimeters, they read like spreadsheets.  Thriving businesses have bigger teams of gardeners' and one software company has a lake surrounded by bulrushes.  At this point, after a digression on poets and the sub-genre of deer roadkill poems, the authors imagine a wild stag wandering into the business park and ask 'Who would notice? Who would write the poem?' Well, why not one of those software company employees, I wondered.  This was one of those moments where the authors seemed to look down on the inhabitants of the landscape rather like eighteenth century tourists (as Robert Macfarlane noted in his review).  But aside from that, Edgelands is an engrossing read, scattered with memorable images - like the railway embankment (to pick just one example) which they compare to a glacier, its litter 'caught like till in the ice, inching slowly towards earth with the general tumble of each season's growth.'  I also find it impossible not to like a book that references Mark E. Smith's magnificent (and overtly misanthropic) 'Container Drivers'...  on which note I'll end this post, playing out with the mighty Fall: '... Look at a car park for two days / Look at a grey port for two days / Train line, stone and grey / RO-RO roll on roll off...'

thanks for the tip on this book/exhibition, and the video - there's nothing mightier than the Fall

... as I cannot help but like a blog on landscape arts that embeds a video by the awesome Fall, whom most of us in America seem to have forgotten ever existed. Love your blog- will be reading through old posts, and I've linked to a 2009 entry in my own art history blog, in which I'm talking about Vermeer's "View of Delft" from a landscape painter's design perspective. Thanks for the Proust stuff there!! Great blog.

Their best days may be behind them, but you have to keep an eye on The Fall, because every now and then they still come out with something essential like 'Dr Buck's Letter'. Glad you like the Proust stuff too. Hard to think of anything Mark E. Smith and Marcel Proust have in common, and indeed a google yields no pages on the web that mention them both.

The artist Edward Chell who I mention in this post has been in touch with me. His latest work can be seen here. He is also editing a new book which sounds really interesting, In The Company of Ghosts; the Poetics of the Motorway, which will feature Iain Sinclair, Clio Barnard, Joe Moran, Cornford & Cross and Dr Malcolm Andrews. There will be a launch and reading at The Poetry Library on London’s South Bank.

Interesting blog (with some very useful links). Matthew Clegg's 'Edgelands' appeared from Longbarrow Press in 2008; a sequence of 56 short poems that plots a (walker's) course through the conflicted landscapes of north Sheffield. You can hear five poems from the sequence at http://soundcloud.com/longbarrow-press/edgelands-by-matthew-clegg

Thanks for the tip - here's a link to the Longbarrow site.