The kill of New York is a brook in New England 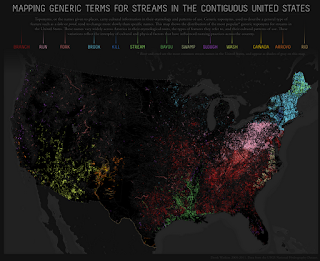 I came across Derek Watkins' excellent map, showing the distribution across America of different toponyms for 'river', on the Spatial Analysis blog (where James Cheshire has added his own UK version).  It reminded me that I have been meaning for some time to do a post here about Home Ground: Language for an American Landscape, edited by Barry Lopez and Debra Gwartney and compiled by a team of writers between 2002 and 2006.  Robert Macfarlane described this book in a wonderful essay published last year ('A Counter-Desecration Phrasebook'): 'Its ambition was to retrieve, define and organise nearly 1,000 terms and words for specific spects of landscape.  Its ethical presumption was that having a language for natural places is vital for two reasons: because it allows us to speak clearly about such places, and because it allows us to fall into the kind of intimacy with such places which might also go by the name of love or enchantment, and out of which might arise care and good sense.'

So what does Home Ground have to say about these river terms?  For the first one, BRANCH, the reader is referred to FORK and the entry, written by Bill McKibben, describes some of the geographical variation evident in Derek Watkins' map.  Easterners are likely to call forks branches, tributory is used elsewhere, 'and those in west Texas would call smaller forks prongs.'  His example of a 'prong' is the North Prong of the Little Red River Fork in Briscoe County Texas.  RUN, according to Kim Barnes, always denotes movement and 'can refer to any small stream, brook, creek, rivulet, channel, overflow, or swiftly flowing watercourse.'  Early Virginian settlers, naming the landscape, came to think in terms of a hierarchy by size: rivers > creeks > runs.  BROOK needs no explanation, but KILL?  It is the Dutch word for brook and appears in the name of landforms of the Hudson and Deleware Valleys, most famously the Catskill Mountains.  The term is not seen in the lower Hudson Valley, probably because, as Jan DeBlieu explains in Home Ground, the Dutch colony was subsumed into the surrounding English speaking culture after the capture of New Netherland in 1644.

Often the authors of Home Ground include illustrative quotations from American literature, like the 'dark stream shooting along its dismal channel' in Melville's Typee.  Gretel Ehrlich's entry on STREAM describes it as a dynamic force that 'receives, and thus reflects, the abuses that have taken place on the land.'  The next few terms, BAYOU, SWAMP and SLOUGH, sound aything but dynamic.  'The bayous are spaces of open water, sluggish or stagnant' and a slough 'is a narrow stretch of sluggish water in a river channel'. The city of Chicago is built on filled sloughs. The word bayou is derived from the Choctaw word for a small stream, bayuk.  Okefenokee Swamp gets its name from a Creek Indian word meaning 'Land of the Trembling Earth'.  A Harry Crews quote explains why: 'most islands in the swamp - some of them holding hundreds of huge trees growing so thick that their roots are matted and woven as closely as a blanket - actually float on the water; and when a black bear crashes across one of them, the whole thing trembles.'

With the word WASH we move into the American Southwest : Carrizo Wash in Arizona, Hunter's Wash in New Mexico. These are areas of land over which 'subtle contours allow water to flow, or "wash", from elevated to lower zones.'  ARROYO can be used to describe the same general feature, or, more specifically, a steep-walled, flat-bottomed creek.  Either way it is ephemeral, 'carrying water only briefly during such events as spring runoff or the summer monsoons.'  Two more Spanish terms complete the map: RIO and CAÑADA, 'a wetland rich with river reeds'.  The words RIVER and CREEK are also included but, are so common that they have been coloured grey.  Here in Britain, a creek is a saltwater inlet or the estuary of a stream.  In the entry for 'creek' in Home Ground, novelist Charles Frazier explains that the term spread to mean any flow smaller than a river.  'In a few places, though, a distinction was retained.  M. Schele DeVere, in his 1872 Americanisms: The English of the New World, put it succinctly: "The kill of New York is a brook in New England, a run in Virginia and alas! a crick or creek, almost everywhere else."'
Posted by Plinius at 9:00 am