The region appeared to be smiling

Robert Walser's novel The Assistant (1908) opens on a spring morning as Joseph Marti knocks on the door of a lakeside villa owned by his new employer, the inventor Carl Tobler, and ends the following winter with his departure, leaving Tobler's family mired in debt and contemplating the inevitable sale of their property. In the afterword to her translation Susan Bernofsky says that the book's last paragraph was trimmed before publication, but that the original ending encapsulates 'the mood of the book's final pages in a poignant vignette in which the landscape that has been granted such powers of expression throughout the novel appears as lost in thought as its observer.'  Joseph looks back at the house one more time, 'silent in wintry isolation ... The landscape appeared to have eyes, and it appeared to be closing them, filled utterly with peace, in order to reflect.  Yes, everything appeared a bit pensive.  All the surrounding colors appeared to be gently and sweetly dreaming.' 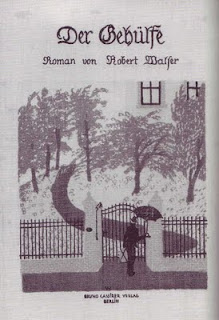 Image from A Journey Round My Skull

The landscape's 'powers of expression' are evident almost every time Joseph leaves the workshop and experiences the natural beauty around him.  These exaggerated examples of the pathetic fallacy read as the imaginative projections of a lonely young man, unsure of his place in this world and witnessing the hopes of his employer sinking into inevitable failure. 'Yes, you tell yourself, colors like this produce warmth!  The region appeared to be smiling, the sky seemed to have been made happy by its own appearance, it appeared to be the scent and substance and the dear meaning of this smiling of land and lake.  How all these things could just lie there, radiant and still.  If you gazed out over the surface of the lake, you felt - and you didn't even have to be an assistant for this - as if you were being addressed with friendly, agreeable words.'

Joseph stays on at the villa despite not receiving his salary, unable to bring himself to leave.  But, he reflects, nature itself never really changes - lakes do not suddenly transform themselves into clouds.  'A wintry image could superimpose itself upon the world of summer; winter could give way to spring, but the face of the earth remained the same.  It put on masks and took them off again, it wrinkled and cleared its huge beautiful brow, it smiled or looked angry, but remained always the same.  It was a great lover of make-up, it painted its face now more brightly, now in paler hues, now it was glowing, now pallid, never quite what it had been before, constantly it was changing a little, and yet remained always vividly and restlessly the same.  It sent lightning bolts flashing from its eyes and rumbled the thunder with its powerful lungs, it wept the rain down in streams and let the clean, glittering snow come smiling from its lips, but in the features and lineaments of its face, little change could be discerned.'

As time passes and autumn turns to winter Joseph still sees nature in benevolent terms, as the countryside 'peacefully and languorously allowed itself to be covered with thickly falling snow, calmly holding out, as it were, its large, broad, old and wide hand to catch everything.'  The last day of the year is unseasonably sunny, reminding him of the time in May when he first arrived at the villa.  The weather 'simultaneously calmed and agitated him', but as evening comes - the last evening he will spend there with the Toblers - Joseph, in 'an almost holy mood' goes for a walk. 'The entire landscape appeared to him to be praying, so invitingly, with all its faint, muted earthen hues.  The green of the meadows was smiling out from beneath the snow, which the sun had broken into white islands and patches'.
Posted by Plinius at 4:13 pm

How to paint landscapes said...

This is interesting! I will come by more often! Thanks for sharing this!...Daniel

I found your blog by searching for blogs where "ventures and adventures in topography" is mentioned. I have subscribed to your blog.

"If you gazed out over the surface of the lake, you felt as if you were being addressed with friendly, agreeable words."

This quote very much fits the use of landscape in real estate advertisements:

I have just come upon Christian Caryl's review of 'The Assistant' in the New York Review of Books. The whole article is worth reading, though accessible only to subscribers. There are some comments on Walser's treatment of landscape towards the end - I like the reference to Van Gogh:

'Even as life inside the Tobler household deteriorates into farce, outside of it Marti is indulging in his propensity for what the narrator refers to as “far-off, almost pathologically lovely reveries”—a nice description, actually, of Walser’s rich, whimsical, scudding style

These bursts of euphoria seem to convey a sense of completeness that’s entirely missing from Marti’s dealings with other human beings ... Pathetic fallacy runs amok: “The small old working-class houses at the foot of the hill appeared to be sleeping in their shapes.” “Nature seemed at times to be rubbing its eyes.” “The region itself appeared to be sentient and to be experiencing different feelings.” “The whole region appeared to be awaiting some regal princess, that’s how delicately and neatly it was dressed.”

The world is rife with human qualities—but other people are rarely involved. Indeed, these qualities manifest themselves almost always when Marti is alone, usually on one of the long walks or swims that help him to order his teeming thoughts. “Moving his arms and legs struck him as hugely enjoyable,” as the narrator notes. (This may also reveal something he shares with Walser himself, who loved to embark on long strolls.) In these states of active solitude Marti’s surroundings come alive, humming with energy in a way that reminds one of Van Gogh’s sizzling landscapes.'