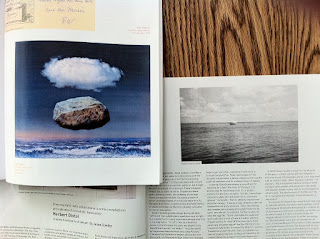 Two photographs in magazines I’ve been reading this month caught my eye.  The first, from Tate etc. (Summer 2011) is Magritte’s Les Idées Claires (1955), an image chosen by Jeff Koons (who likens the boulder floating over the sea to one of his basketballs in water).  The second, from The Wire (May 2011) is Herbert Distel’s Projekt Canaris (1970), showing a three metre long polyester egg which the artist launched from the coast of West Africa.  A similar piece is referred to in David Clarke’s recent book Water and Art – in Beyond Twelve Nautical Miles (2000) Zhan Wang set one of his stainless steel rocks adrift at sea near Lingshan Island.   And I have written here before about David Nash’s Wooden Boulder, which began as a sculpture in the landscape but after describing the course of a river ended up as another of these art boulders, set free on the sea.  As far as I know the current location of Wooden Boulder remains a mystery.  Distel’s egg  was driven by trade winds across the Atlantic and reached Trinidad seven months later.

I wonder why there hasn’t been more ‘sea art’, floating equivalents to the famous land art projects of the American West?  Tacita Dean may have had trouble ‘Trying to Find Spiral Jetty’ (1997) but tracking down a sculpture in an ocean could have been even more interesting.  Herbert Distel sought help from the Cuban authorities in locating his egg after it sailed beyond the Canary Islands and was thought to be heading into the Caribbean.  It was eventually spotted by the captain of a Dutch ship who sent a telegram: ‘Egg seen on 6 December 1970 gmt 17.50, about 100 km east off the island of Trinidad.’ Of course I’m not really advocating that we litter the sea with permanent floating art works.  Instead sea artists might take inspiration from Buster Simpson, who has an ongoing project to drop disks of limestone into the Hudson River: rocks that will gradually dissolve and counteract the effects of acid rain.
Posted by Plinius at 6:05 pm

Maybe it would be better if artists didn't add to the enormous and dangerous amount of plastic already floating in the seas :-)

On the other hand there are some artists that remove plastic from the sea:

Gardener in the Distance said...

A stimulating post, as ever, Plinius. Land art reveals the effects of the world upon it, but sea art is in danger of disappearing altogether/immediately. What about 'sky art'? I'm out of touch, but all I can think of is kinetic/wind work.

I think those 29,000 yellow plastic ducks -- lost overboard in mid-Pacific, and bravely bobbing through the worst the oceans can throw at them, then washing ashore all over the world -- are probably the ultimate piece of "found" ocean art. Quite a handy piece of science, too.

Are you a fan of Roxy Paine? These floating sea rocks made me think of his trees, one of which is outside my university office window. I love that idea of ocean art--our last frontier (until the drill baby drill gang gets their way).

Thanks to others for those comments and suggestions. On sky art I'd recommend this recent post on BLDGBLOG.