The exterior panels of Northern Renaissance altarpieces were sometimes painted in what my computer would call 'grayscale' but what art historians refer to as 'grisaille' (a term invented in the seventeenth century to describe stained glass in different shades of grey).  As Susie Nash points out in her book Northern Renaissance Art, these grey panels would also have provided a 'suitably less materially-rich image for Lent and ordinary feast days, and a more durable protective covering, easier to repaint and with no colours to fade.'  Typically these would show Biblical figures as if they were statues and would contrast dramatically when opened with the 'real' figures painted inside.  No wooden altarpiece could have supported the weight of actual stone sculpture and so painting 'made possible the impossible, and painters developed and complicated the idea further by representing sculpture that would have been near-impossible to carve, or in which there is ambiguity about whether what is represented is a sculpted or living form.'  Once artists had developed this practice of painting disconcertingly life-like stone figures, it was not too great a step to replace their sculptural niche with a natural setting - a grisaille landscape. 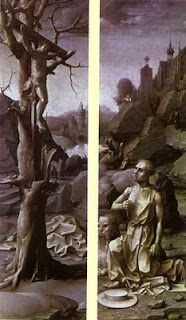 Jan Gossaert, Saint Jerome Penitent, ca. 1510
The panels above showing Saint Jerome in the wilderness have clearly left the idea of painted sculpture behind - but for the grisaille they are fairly traditional depiction of the story (showing two earlier episodes in the saint's life in the background).  In other media, frescoes and illuminated manuscripts were also being produced at this time in monochrome or with deliberately reduced palettes, emphasising form over colour.  But looking at this painting on a grisaille winter's day last week, in the National Gallery's new exhibition Jan Gossaert's Renaissance, I was still struck by the scene's uncanny resemblance to a world turned to stone. Perhaps it is because Saint Jerome himself is holding a rock, as he kneels in the rocky landscape with a great stone city in the background, whilst on the other panel, the statue-like figure of Christ is set on a petrified tree beneath an ash-coloured sky. 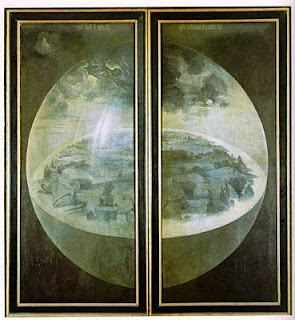 
Possibly the best known grisaille outer panels from this period are those of Hieronymus Bosch and those for The Garden of Earthly Delights show the earth as it was on the third day of creation.  This is a world before colour, where land is only just emerging from the misty sea under dark rain clouds, and newly formed trees are seen alongside other stranger growths, half-vegetable, half-mineral.   Italo Calvino's story 'Without Colours', in Cosmicomics, describes the the beauty of the grey earth before an atmosphere has formed to filter the light of the sun.  Here 'trees of smoke-colored lava stretched out twisted branches from which hung thin leaves of slate.  Butterflies of ash flying over clay meadows hovered above opaque crystal daises...' Calvino's hero Qfwfq, who yearns for contrast, colour and sound, falls in love with the beautiful Ayl, 'a happy inhabitant of the silence that reigns where all vibration is excluded'.  When the world begins to change Ayl takes fright at the disruption to her beloved neutral landscape and they are parted.  As Qfwfq looks sadly out on the 'canary-yellow fields which striped the tawny hills sloping down to a sea full of azure glints, all seemed so trivial...'  He realises Ayl could never have been happy here among 'those gilded and silvered gleams, those little clouds that turned from blue to pink, those green leaves that yellowed every autumn, and that Ayl's perfect world was lost forever.' 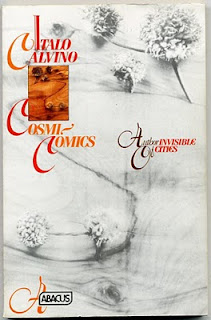 Very interesting idea... you may be onto something here.

My interest in grisaille came from another medium, as you noted. In stained glass windows of northern countries, I can imagine that the grisaille gleamed like silver in the grey light of day. How different that would have been in overly-bright Mediterannean countries.

If frescoes, altar pieces and illuminated manuscripts were created in grisaille, they would not have had the beauty of light coming in from behind the image. So emphasising form over colour had a different function *nod*.

For those interested in the history of grisaille there's quite a good overview here: http://arts.jrank.org/pages/9664/Grisaille.html

Very nice, thanks for sharing.

I was glad that you have drawn attention to North European practice of using grisaille in the painting of outer doors of triptychs and, as Hels writes, in stained glass. I have always admired the technique; I do not see it as the John Major school of art. But one aspect puzzles me. I note that in some cases, architectural details show stone in all its pure elegance with shadowing giving it an almost three dimensional impact. But we are told that most stone work inside medieval churches, including monumental tombs, was painted. This polychromatic vision might have looked somewhat garish to our modern eyes. Does the use of grisaille suggest that artists were aware that monochrome images had an intrinsic majesty and power of their own?