The storm runs forth on several seas 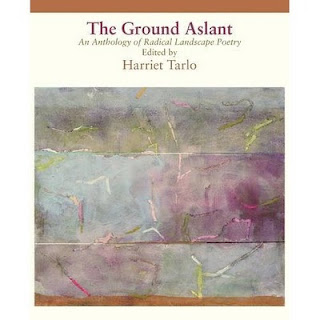 Harriet Tarlo's anthology of radical landscape poetry The Ground Aslant, which I previewed in an earlier post, has now been published.  Shearsman have made the book's introduction available to download on their website, so there's no real need for me to summarise its contents.  Here instead is an unrepresentative sequence of quotations (copyright prevents the inclusion of whole poems), chosen to provide 'some landscapes' from each of the sixteen poets, starting with the editor:

- from 'Outcrops at Haverrig', by Harriet Tarlo


...between loss and consolidation
in the hollow of the dune slack

- from the second short poem in Thomas A. Clark's sequence 'The Grey Fold'

- from the April section of 'Myne' by Frances Presley, on a walk from Greenaleigh to Porlock Bay


... I hear mud rustle
ducks come in to land
tide recedes in intensity


- from 'lights' by Ian Davidson, whose afterword to his collection At a Stretch worries that 'there may be too much landscape' in his poetry...


...  At Kingwater the stream plashes
kingcups over the green ironbridge, pupae to dust wedges
and rust coloured reflections of trees in water.
Flag irises, rhododendrons.  Out of focus pine trees, lacking their bitmap,
alive only in geological time. ...


- from 'The Stars Have Broken in Pieces' in which Nicholas Johnson passes through the landscape of northern England, from Derbyshire to Cumbria


- from 'Carcajou' by Colin Simms, poet and naturalist who was the subject of an earlier post here


Trees pale in knot but nowhere in cooped flux of them, not-bending swivels a sky foldlessly relenting.  Leaning skyward can't suffer on the slant, only drawn off slope by the unholdable intimacy of vertical separation.


- from 'Lean Earth Off Trees Unaslant, 3' by Peter Larkin


... a little light at dusk by which to sit and read the blanched white ash-stems reaching sky
ward the steep woody tangle above the tumbling stream each stem gleams in the January dull ...


- from Wendy Mulford's 'Alltud: 'exile'', part of a description of the Wye valley at Erwood in Powys


- from 'Prelude' by Peter Riley


the feeding of one into the landscape results
in a climbing to infinity this opens the labour of a day
the task is to find a distribution of fields
and from these the truth of this place ...


-  the first lines of Carol Watts' Zeta Landscape, which the author has described as "lyric nature poetry put under pressure"

pull on
contours held in common:
plough through   brick, steel, steads
under cooling towers, the soils
worn thin for nitrogen ...


- from 'aurals' by Tony Baker, a landscape seen on 'the journey toward Mansfield'

... seductive flowertrails
penetrate the hills where we confront
the ambiguity of wayposts &
clouds that distil a thin
gleet ...

- from 'Lady's Bedstraw (Gallium verum) / Quantocks' by Elisabeth Bletsoe, who, as reported here, I saw at the second Re-Enchantment event last year


The storm runs forth on several seas whose manner is
the hard edge of a clamber down gneiss...

- the opening words of 'Dale' by Helen Macdonald

no shadow but
wisp-
errs
the arc
amongst crystals
of
ice.


- from the 'High clouds base >20,000 feet' column of a tabular poem, one of a sequence called The Speed of Clouds by Mark Dickinson
Posted by Plinius at 5:42 pm