The grey sea turns in its sleep 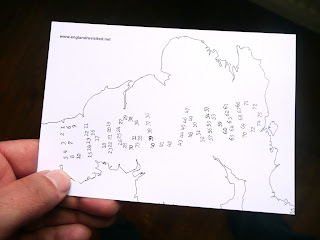 To the South Bank Centre last night for the launch of a new anthology of prose and poetry about landscape and place - the second manifestation of The Re-Enchantment project.  I am also planning to be at their next event in January, the premiere of Grant Gee's film Patience (After Sebald), inspired by The Rings of Saturn.  The first Re-Enchantment project, England Revisited, has just come to an end - the return of Simon English to each of the sites he marked with a St. George's flag when making his All England Sculpture in 1971.  Back then he 'mapped and graphically marked out the word ENGLAND physically, precisely and equally down the length of a Bartholomew’s ordnance survey map of the country, dividing the word into 75 component points, thus converting the place into the word' (see above). The new work reflects the changes time has brought to these locations and there is a website where you can select a point and compare the landscape in 1971 and 2010.  There are also videoclips of the artist - I've included an example below.


Anyway, back to last night and the anthology: Towards Re-Enchantment: Place and its Meanings. The launch featured three poets: Elisabeth Bletsoe, Robin Robertson and Kathleen Jamie.  Elisabeth Bletsoe went first, prefacing her own work with a poem on the Sussex Downs by a key influence, Brighton poet Lee Harwood.  She then moved on to her 'Here Hare Here' (which initially set me thinking about Withnail and I) and some bird poetry inspired by The Sherborne Missal.  Her poem for the Re-Enchantment collection fuses the topography of Dorset and the story of St Wite, also known as St Candida, traditionally held to have been a Saxon woman killed by the Vikings, whose medieval shrine can still be seen at Whitchurch Canonicorum. 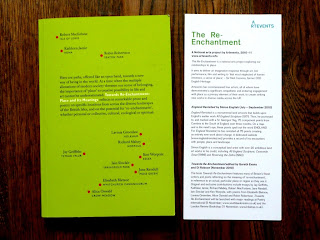 "I'm Robin Robertson and I'm from Aberdeen" announced the evening's second poet, and he proceeded to read 'Aberdeen', a poem that begins and ends with the lines: 'The grey sea turns in its sleep / disturbing seagulls from the green rock.'  His contribution to the anthology, 'Tillydrone Motte', is also set in Aberdeen, describing the highest point of Seaton Park - a mound he played on as a child, when it was thought to be the remains of an old castle.  Now the poet is older, no longer able to climb the trees or ford the river, and the motte has been found to be a Bronze Age burial cairn.  Robertson is a mesmerising performer, as you may be able to see from the clip I've embedded below, and everyone seemed engrossed as he read out his poems.


The evening concluded with Kathleen Jamie's, 'On Rona', a prose account of a trip she made to an island 'far over the horizon, out in the north Atlantic', forty miles from the coast of Scotland - 'one last green hill rising from the waves.'  Like the landscapes in her book Findings, this was a location freshly observed with close attention and warm humour.  Her encounters with birds - the rare Leach's petrels with their secret nests dotted over the island - echoed some of the evening's earlier readings.  She closed the event with a Norman MacCaig poem, read partly in tribute to a writer whose centenary is this month.  There is a lot more to say about these poets and I will try to write more about them in future posts.  Indeed there is rich landscape material throughout the Re-Enchantment book - essays by Ken Worpole, Richard Mabey and Robert Macfarlane for example, along with a piece by Iain Sinclair on one of our local parks which concludes with an encounter with Stoke Newington's own Chinese landscape poet, Yang Lian.
Posted by Plinius at 3:42 pm

My pleasure. I've now read the book and thought it was consistently excellent - highly recommended to readers of this blog.