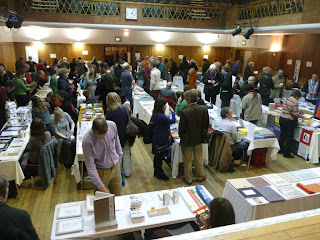 To the Small Publishers Fair at Conway Hall on Saturday, where I bought a copy of Englands Helicon (1600) from the Shearsman stall - more on this in a future post.  I found I was talking about my recent trip to Scotland with various people, including Peter Foolen, who was recommending to me the work of Scottish artists and writers like Alistair Peebles, Robert Alan Jamieson and Alexander Hamilton.  I learned that Hamish Fulton had been in earlier and had left behind with Colin Sackett a copy of his new book, The Uncarved Block, a beautifully produced volume from Lars Müller Publishers.  It is about the Everest expedition last year where Fulton went where no land artist has gone before and became the oldest British person to reach the summit (unfortunately Sir Ranulph Fiennes took away this record just two days later).  It is odd to think of a trip like this, with Hamish Fulton one of the group being led to the summit, as one of his art works; we are conditioned to thinking of Fulton's walks as solitary ventures, like paintings, or, more recently, collaborations where others take part but Fulton is still the artist-creator.  The book must therefore be more than usually important as a record of the experience and his take on the culture of Everest expeditions - I'd have liked more time to take a proper look at it. 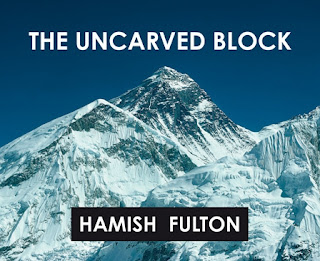 It was interesting to compare opinions with Colin (below) on the English landscape, recent nature writing and cultural geographers.  He told me his next project is a book about Wistman's Wood, a haunted spot associated with druids and said to harbour 'writhing adders who spawn their young amidst the moss and leaf strewn tree roots'.  Back in 1797 the Reverend J. Swete wrote that 'silence seemed to have taken up her abode in this sequestered wood - and to a superstitious mind some impression would have occurred approaching to dread, or sacred horror.'  More recently John Fowles wrote about this remnant of the primeval forest in his book The Tree: 'it is the silence, the waitingness of the place, that is so haunting; a quality all woods will have on occasion, but which is overwhelming here — a drama, but of a time span humanity cannot conceive'. 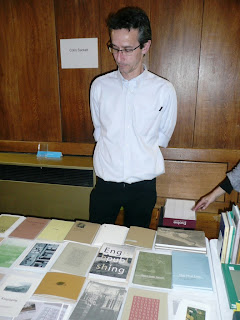 It is a magical place, and one I remember from a field visit as an undergraduate in the early 1980s...
The power of PLACE....

Nice weather you had! I've never been there myself...