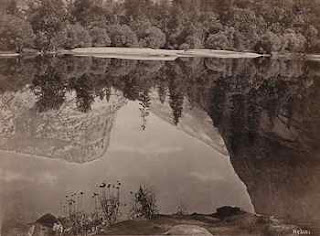 The Tate's Eadward Muybridge exhibition gives a good account of his famous experiments in the photography of movement but also includes his earlier landscape photographs and panoramas of San Francisco, in which all movement is frozen and the emphasis is on the clarity of a single view.  In Rekootoyen (Water Asleep) Mirror Lake from the Western Bank (1867) he found a subject in which the lake surface was so still that you can see the individual trees reflected on the distant mountains.  Looking at Toloolweach Fall in South Canyon, Yosemite (1867) you see the waterfall slowed by the long exposure to a shaft of light which could just as easily be shining upwards, out of the rocky valley. When Muybridge returned to Yosemite in 1872, he went to great lengths to capture the view he wanted - the Daily Alta California reported worryingly that 'he has cut down trees by the score that interfered with the cameras from the best point of sight'.  And to bring out 'the full beauty of the object to be photographed' Muybridge apparently had himself lowered over precipices by ropes.  Back in the studio, like a nineteenth century Andreas Gursky, he would touch up and combine images: two landscapes in the exhibition, photographed a year apart in Yosemite and at Pigeon Point in California, have exactly the same sky.

Seeing these panoramic photographs so carefully composed into timeless views, followed by Muybridge's sequences of images where motion is abstracted from any setting, made me think about the separation of space and time in his work.  Having downloaded the Tate's Muybridgizer iPhone app to take little zoopraxiscope movies of my sons, I tried filming the view across the river outside Tate Britain, to see the small changes visible over even just a few seconds.  It's probably impossible to make out from the composite image below, but the waves on the Thames and the wind in the trees can be seen moving if you view these photographs in quick succession. 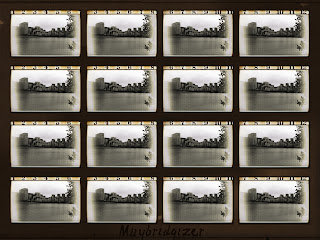 Water Asleep - beautiful photograph and beautiful title. Says so much so quietly.

yes- I can discern the movement of the waves in your sequence!

Thanks. One sublime Muybridge photograph I didn't mention is 'Contemplation Rock' (1872) - the third image on the Tate's site here.