The horizon of Holland 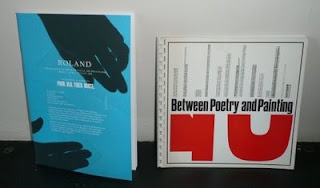 On Tuesday Stephen Bann came to the ICA to give a talk about Ian Hamilton Finlay. He focused on the pre-Stonypath period and included some never-published colour photographs that he had been unable to use in an Architectural Review article (it was only printed in black and white in those days). One of these photographs showed THE HORIZON OF HOLLAND IS ALL EARS, a concrete poem made into a wooden structure and placed in the garden of Finlay's home in Ross-shire. This is the first of Finlay's interventions in the landscape, the ancestor of the sculptures at Little Sparta.

There were several references in the talk to Finlay's poetic interests and links with contemporaries like Lorine Niedecker. Finlay wrote to Bann saying that the landscape of Orkney was equivalent to a Wallace Stevens poem. He also said that Orkney resembled concrete poetry, whilst Perthshire seemed more like the writing German poets like Trakl. The less particularised landscape of Ross-shire on the other hand required more effort to make a poem out of the place... the kind of effort Ian Hamilton Finlay put there into making his first artist garden and his first poem in the landscape.
Posted by Plinius at 7:11 pm