Design for an artificial echo

In a previous post here I quoted an extract from Gilbert White's A Natural History of Selborne, which included a proposal: "Should any gentleman of fortune think an echo in his park or outlet a pleasing incident, he might build one at little or no expense. For whenever he had occasion for a new barn, stable, dog-kennel, or the like structure, it would be only needful to erect this building on the gentle declivity of an hill, with a like rising opposite to it, at a few hundred yards distance; and perhaps success might be the easier ensured could some canal, lake, or stream, intervene. From a seat at the centrum phonicum he and his friends might amuse themselves sometimes of an evening with the prattle of this loquacious nymph..."

Back in the late seventeenth century, John Evelyn had the same thought and provided a design in his unpublished Elysium Britannicum, "to instruct you how to produce an Artificial Echo and by an innocent magick & without superstition, to raise up & deprehend that vocal & fugitive Nymph." The illustration below is reproduced from John Dixon Hunt's Greater Perfections, in which it is used to illustrate the point that Evelyn, generally a proponent of natural gardens, was nevertheless happy to recommend artificial effects where nature had not provided them. 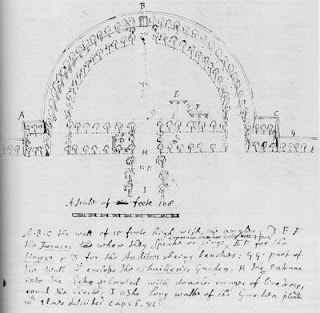 In John Evelyn's "Elysium Britannicum" and European Gardening Therese O'Malley describes this as a sketch of the artificial echo at the Tuileries in Paris. The excellent Gardenvisit.com includes an extract from Evelyn's diary from 4 February 1644: "I finished this day with a walk in the great garden of the Tuileries, marvelously contrived for privacy, shade, or company, by groves, plantations of tall trees, especially that in the middle, being of elms, the other of mulberries. It has a labyrinth of cypresses; not omitting the noble hedges of pomegranates, fountains, fish-ponds, and an aviary; but above all, the artificial echo, redoubling the words so distinctly; and, as it is never without some fair nymph singing to its grateful returns; standing at one of the focuses, which is under a tree, or little cabinet of hedges, the voice seems to descend from the clouds; at another, as if it was underground..."

Evelyn's experience in Paris is referred to in a 1995 survey of artificial soundscapes by Joseph Dillon Ford, 'From Vocal Memnon To The Stereophonic Garden, A Short History Of Sound And Technology In Landscape Design': He concludes: 'the creation of acoustically pleasant and appropriate landscapes represents a significant opportunity for those who recognize that a design which delights the eye but neglects the ear is likely to be as well-received as a handsomely costumed actor who mumbles, butchers or forgets his lines. An excerpt from Alexander Pope's An Essay on Criticism (part II, line 62) seems especially appropriate in this connection: "Tis not enough no harshness gives offence; / The sound must seem an echo to the sense." Those landscape architects who fully appreciate the historical role of sound as a design element essential to the creation of a strong sense of place and who accept the considerable technical, aesthetic, environmental, and legal challenges required to renew the soundscape, will have the distinct satisfaction of extending their art into new, ever-richer realms of poetic experience.'
Posted by Plinius at 6:00 am