The West Lake of Hangzhou

An article in February's Landscape Architecture by Carl Steinitz is entitled ‘Landscape Planning A History of Influential Ideas’. Reading it reminded me a bit of those Medieval chronicles which start with a brief history of the world before proceeding seamlessly to a detailed account of much more recent events. His list begins in Song Dynasty China, races forward past the Medicis' villas and English landscape gardens before slowing down in the late nineteenth century and then dwelling on a range of American landscape architects and related figures. These include Eisenhower, who makes the list for coming up with interstate highways, and Lady Bird Johnson (more positively) for adding aesthetic considerations to the US National Environmental Protection Act’s criteria.

The first in his list of great ideas is the West Lake of Hangzhou: ‘important because it is the result of a decision made in the eighth century to build a very large lake - a deliberate act to create a new landscape on a large scale. This landscape was made primarily for reasons of defense, water supply, aquaculture, and agriculture. In the Song Dynasty it was rebuilt under the direction of the poet and governor of Hangzhou, Su Shi (1037-1101). Over time, it has become considered 'natural', a place of great scenic beauty and cultural importance. Emperor Qianlong's Ten Scenes of the West Lake, poems composed in the 18th century, is learned by all Chinese schoolchildren today. Too many people believe landscape planning is only conservation and reaction, but the West Lake shows that landscape planning includes action with foresight. The big idea embodied by the West Lake is that a landscape built for practical reasons can be designed and transformed over time into a highly valued cultural landscape, and even one that is primarily assumed to have been the result of natural processes.' 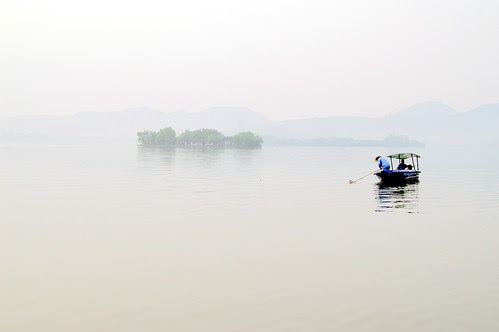 
This account misses out Su Shi's predecessor as governor of Hangzhou, Bai Juyi (who I still think of in Wade-Giles terms as Po Chü-i). Bai Juyi was prefect of Hangzhou in 822-24 and rebuilt the dyke that previous governors had neglected. He ordered 'the construction of a causeway connecting the Broken Bridge with the Solitary Hill, to facilitate walking on foot, instead of depending on boat. Then he planted coolabah trees and willows trees along the dyke, making it a beautiful landmark'. The causeway is now known as Bai Causeway (another one, the Su Causeway, was built later by Su Shi). One of Bai Juyi's poems about the West Lake (called in earlier times Qiantang) can be found here: 'The water's surface now is calm, the bottom of the clouds low. / In several places, the first orioles are fighting in warm trees, / By every house new swallows peck at spring mud.'

Here is the list of Emperor Qianlong's Ten Scenes:


Dawn on the Su Causeway in Spring
Curved Yard and Lotus Pool in Summer
Moon over the Peaceful Lake in Autumn
Remnant Snow on the Bridge in Winter
Leifeng Pagoda in the Sunset
Two Peaks Piercing the Clouds
Orioles Singing in the Willows
Fish Viewing at the Flower Pond
Three Ponds Mirroring the Moon
Evening Bell Ringing at the Nanping Hill
Posted by Plinius at 9:17 pm