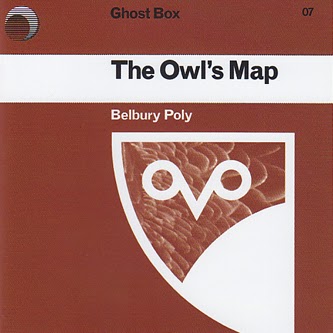 I have been listening to The Owl's Map, an album on Ghost Box by Belbury Poly. It is is based on the fictitious 'ancient market town of Belbury' which, according to the sleeve notes, 'is an uneasy mix of ancient and modern': Iron Age ramparts and a 'picturesque 11th century church', but also 'some notable modernist architecture', including the Polytechnic which gives its name to the group. The album is labelled 'Field Guides to British Towns and Villages Volume 7'. It contains murky photographs which, like the images in W.G. Sebald's books, invite you to peer at them trying to work out the boundary between truth and fiction. Most seem to have been taken in the 1970s (see here for example), a time when such towns were uneasily facing both backwards and forwards (before the homogenisation of identical chain stores and the re-branding of polytechnics as universities). The music itself sounds futuristic and pastoral at the same time, whilst the design is inspired by old school textbooks and Penguin paperbacks.

Simon Reynolds has investigated Ghost Box and other strands of 'haunted audio' in contemporary music for an article in Wire and his Blissblog features outtakes from this, including some thoughts on 'The Owl's Map' as a title: 'the owl: the perfect Ghost Box bird-mascot, where the wholesome (children's story books from Winnie the Pooh onwards, bird-watching guides, owl as symbol of wisdom etc) collides with the umheimlich (spooky creature with ultra-acute nightvision). Nature studies meets the supernatural... the map: likewise collides the scientific / precise / diagrammatic / official-bureaucratic-governmental-landsurveying (all those symbols indicating building types, gradients, terrain, natural features and man-made monuments) with the more magical evocations (parchment scrolls, the manuscript illuminating occult path-ways, routes to the treasure…)'

In his interview with Reynolds, Jim Jupp, the man behind Belbury Poly, says that The Owl's Map concept derived partly from old tourist guides ("you know the sort of thing, murky old photos of Chichester Cathedral") and that the colour scheme for the album was inspired by the "those brown road signs that point the way to Roman ruins, falconry centres or stately homes." Jupp's partner in Ghost Box, Julian House, plans to start making films about Belbury (which is named, incidentally, after the fictional town in C S Lewis's That Hideous Strength.)