There is a nice exhibition of Hiroshi Sugimoto photographs at the Hirshhorn Museum site. Here is how he introduces some of his seascapes: "One New York night in 1980, during another of my internal question-and-answer sessions, I asked myself, "Can someone today view a scene just as primitive man might have?" The images that came to mind were of Mount Fuji and the Nachi Waterfall in ages past. A hundred thousand or a million years ago would Mount Fuji have looked so very different than it does today? I pictured two great mountains; one, today's Mount Fuji, and the other, Mount Hakone in the days before its summit collapsed, creating the Ashinoko crater lake. When hiking up from the foothills of Hakone, one would see a second freestanding peak as tall as Mount Fuji. Two rivals in height—what a magnificent sight that must have been! Unfortunately, the topography has changed. Although the land is forever changing its form, the sea, I thought, is immutable. Thus began my travels back through time to the ancient seas of the world."

"Immutable", but never the same... as you look at the different seas you wonder if he has captured essential differences in them - the hazy shimmer of Boden Sea, Uttwil (1993), the firm horizon of Tyrrhenian Sea, Conca (1994) or whether in different atmospheric conditions these images could be reversed.

In an interview here Sugimoto says: "The first portfolio of seascapes I published was entitled 'Time Exposed' because time is revealed in the sea.... People have a lot of strange ideas about my seascapes - they think these photographs were done using very long exposures, but they are in fact very fast because I wanted to stop the motion of the waves, which are constantly moving. You heard I took some photographs using a camera speed of zero ASA? That's impossible."

Postscript 2015:
I was wondering if it might be possible to include a fair use / non-copyright image with this now and I see that since I wrote this post the photograph Boden Sea, Uttwil has been used for two album covers.  The first, below, was Specification.fifteen (2006) by Richard Chartier and Taylor Deupree.  Three years later U2 used the same image for No Line on the Horizon. 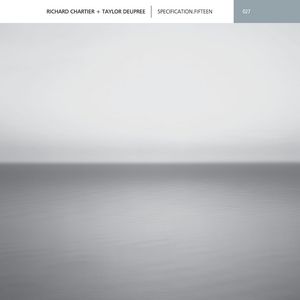