House by a pond 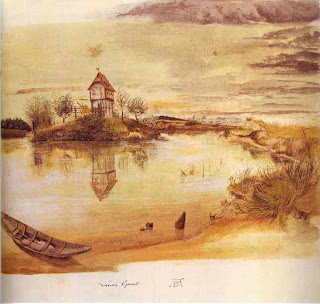 In about 1496 Albrecht Dürer painted a House by a Pond on the outskirts of Nuremburg, after returning from his first trip to . The tall house in the painting may have been a look-out post or a summer retreat.

Dürer re-used this landscape in an engraving, The Madonna with the Monkey (c1498). In his book on Landscape and Western Art, Malcolm Andrews uses these two images by Dürer to discuss the issue of independent landscape painting and the distinction between landscape as setting or subject. The artist’s introduction of religious figures gives the landscape a new mood as well as a new meaning. It also illustrates the usefulness of the sketch, and the fact that it would have been difficult to conceive of a landscape like House by a Pond as a work of art in its own right.

However, the story doesn’t end there. I came across this house once again (when I was looking for images of flight) in Giulio Campagnola’s engraving The Rape of Ganymede (ca. 1500–1505). Here the Neoplatonic symbolism of the subject seems to imbue the house with a strange significance.

But this simple German landscape was not infinitely adaptable. There is a maiolica plate in the that uses Dürer’s Madonna and Monkey. However, it replaces the landscape of House by a Pond with an Italianate ruin (see Plate 19 in Dora Thornton’s article ‘The Use of Dürer Prints as Sources for Italian Renaissance Maiolica’).
Posted by Plinius at 9:48 pm

Another relevant image can be seen in the catalogue to the excellent exhibition held in 2002 at the British Museum entitled 'Albrecht Dürer and his Legacy'. Here there is an image called 'Landscape with a Woodland Pool' (cat.no.44). It is described as "one of Dürer's most sensitive and atmospheric portrayals of nature. The tall pine trees and sandy soil of the landscape are typical of the outskirts of Nuremburg ... Together with the watercolours of 'Fisherman's House on a Lake, near Nuremberg'(sic) (cat.no.193) and 'Mills on the River Pegnitz' which also represent the countryside around Nuremberg, it was probably executed soon ater the artist returned from Italy. The colouring, the heavy, clouded skies and the technique are very similar in each, although much less bodycolour is used in the present sheet. This gives it a more modern appearance than perhaps any of his other watercolours."

Yes, the landscape is similar - sandy soil, tufts of dune grass, a yellow sky with dark clouds - although the watercolour you mention has no buildings.