Christopher Wood’s book In Ruins elegantly describes the various ways in which ruins have been appreciated. What could have been a rather well-worn subject is given a sharper edge by Woodward’s criticism of the urge to preserve; he has an unashamedly Romantic view of the pleasures of decay. He contrasts Shelley’s excited pleasure in the overgrown Baths of Caracalla with the disappointments of today’s carefully managed tourist site, kept clean of encroaching vegetation. The culprits are not just the tourist authorities, they are the archaeologists who strip sites of their poetry. Of course such a view may seem extreme to some. However, I think he is right that we continually underestimate the importance of natural processes and hidden mystery in ruins. 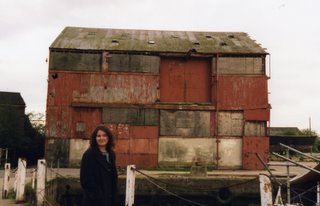 Cook's Shipyard in 1999
The picturesque takes many forms. As an occasional visitor to Wivenhoe in I have always enjoyed walking through the old disused sheds of Cook’s Shipyard. They have all the usual poignancy and rusting beauty… ‘had’ I should say, because on a recent visit I found that the area is being developed. The eighty-four houses going here will I suppose be tasteful versions of the old fishermen’s cottages: ideal for commuters into , designed not to spoil the riverside views... The old ruined sheds were probably dangerous. Even without all the facts I can see how difficult it is to argue against this development. But I still feel a residual sadness that the processes of transformation have been stopped before the shipyard’s final decay into the river mud.


In her excellent recent photo essay for Slate, Caitlin DeSilvey argues that some structures should be allowed to “melt instead of remaining frozen.” The process of decay can reveal more meaning than a historical preservation. But this may only be acceptable in remote locations – as was made clear when turned down Camilo José Vergara’s proposal for a ‘ruins park’. Entropy has to be reversed in areas of regeneration and kept eternally at bay in famous historical sites. It is increasingly hard to find real ruins...

Email ThisBlogThis!Share to TwitterShare to FacebookShare to Pinterest
Labels: ruins