This earth is cursed

I was at the White Cube on Sunday to see the latest batch of Anselm Kiefer paintings, Superstrings, Runes, The Norns, Gordian Knot.  I am a huge admirer, but I know he does not appeal to everyone.  For me, the beauty of these artworks as physical objects is evident regardless of their possible meanings and interpretations.  The composition above, for example, is in a room devoted to the theme of the Gordian Knot, but I didn't immediately start puzzling out its meaning or worrying over whether it is profound or pretentious; instead, what struck me was the feeling that I'd never before seen a field painted with such dramatic intensity.  What you can't appreciate from a photograph is the sense of scale, the texture of paint or the subtleties of its wintry colours (that sunset glow and the purples and greys of the sky).  Writing in The Guardian, Jonathan Jones described these waves of wheat as being 'arrayed like a flowing frieze of abundance. Real branches daubed with gold have been used to create their colossal stalks. But two axes hang in the gleaming fullness, waiting to devastate this cornucopian field. This earth is cursed.' 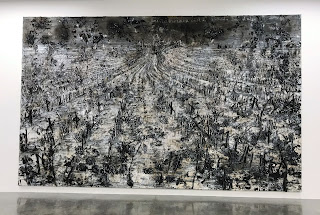 The second landscape I want to highlight here is called Väinämoinen sucht die drei fehlende Buchstaben ('Väinämoinen Searches for the Three Missing Letters' - a reference to the Kalevala, Runo XVI).  Those black posts standing in rows in the snow (or is it ash?) are shaped like runes.  In the foreground some of them are made from actual pieces of charred wood.  This painting is a kind of text (like the Landscripts of Xu Bing) and because runes were used for divination there seems to be some kind of hidden prophecy in this bleak landscape.  The Norns, which Kiefer refers to in the title of his exhibition, were the spinners of fate in Norse mythology.  In an installation stretching the length of the gallery, their names - Urd, Verdandi and Skuld - are written alongside the equations of string theory, suggesting a continuity between ancient and modern means of unlocking the world's secrets.

I'll conclude this post with one of three paintings called Superstrings, each of which measures nearly three metres high and eight metres wide.  All of them appear to be desolate landscapes of earth, snow, muddy water, stubble, straw and leafless trees.  Approaching the one I have photographed here, I felt I could still make an art historical connection to Van Gogh's ploughed fields.  Right up close, the paint surface resembles a rain soaked field or a muddy path.  But from further away, those furrows start to seem more abstract - lines of force, converging at speed towards a grey sunless horizon.  We are used to thinking of the universe in terms of pure and beautiful structures like celestial spheres or Platonic solids, but Kiefer is clearly drawn to a messier, more chaotic theory of the cosmos. 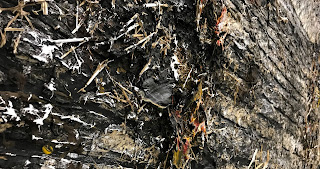 As a fellow Kiefernatic, I recommend a visit to the British Museum's free "Pushing Paper" exhibition of contemporary drawing, where there is Kiefer gouache of a cornfield in a very different mood ("Your Golden Hair, Margaretha", 1981). Also a sketched schema of David Nash's "Wooden Boulder" project, which I think you've covered in the past.