When Beethoven premiered his Pastoral Symphony in Vienna on December 22, 1808, he wrote that it should be considered "more an expression of feeling than painting." It is a feeling for nature that comes over strongly in a letter:


"How delighted I will be to ramble for awhile through the bushes, woods, under trees, through grass, and around rocks. No one can love the country as much as I do. For surely woods, trees, and rocks produce the echo that man desires to hear"

(quoted in NPR programme notes on the Pastoral Symphony).

I have written here before about this 6th Symphony, although the theme of that earlier post was a much more obscure work that it resembled in form, Justin Heinrich Knecht's A Musical Portrait of Nature (1784).  Here, I want to highlight an interesting project that is due to culminate in 2020, Beethoven's 250th anniversary.  The Beethoven Pastoral Project 'invites artists from all over the world to form a network through their engagement with Beethoven's 'Pastoral’ Symphony', to 'take a stand against environmental degradation and to stand up for the UN's sustainable development goals and the Paris Agreement with a performance of 'their Pastoral''.  These performances will be on June 5 2020. 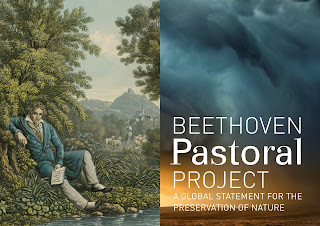 According to a Deutsche Welle, in a Novermber 2017 article shortly after the project launched at COP23 in Bonn, several artists  had already signed on, 'including the Chinese composer and conductor Tan Dun, the American composer Uri Caine, the German jazz musician Gregor Hübner, the Deutsche Kammerphilharmonie Bremen and its principal conductor, Paavo Järvi, as well as the Beethoven Orchestra Bonn and its principal conductor Dirk Kaftan.'  DW later interviewed Dirk Kaftan (great name!) about the project. He described the movements of the symphony, from the first - which is "about exhaling, letting go - and seeing nature as a refuge, a source of harmony and a point of balance" - to the last:


"Kuhreigen" – a cow waltz. This kind of melody is still played today on the alphorn in Switzerland to encourage cows to produce more milk. You could see this moment as simply a romanticized dream of Swiss milk and high-quality chocolate. But at the time when the Sixth Symphony was written, Switzerland was highly charged politically, and listeners at that time would have associated that with those sounds. Freedom struggles were taking place in Switzerland; just think of William Tell [I think he's referring here to Schiller's 1804 play]. I see this last movement as a hymn to humanity and the power of humans to change things.

It's hard to tell how the Beethoven Pastoral Project is progressing and whether they have had as many big names as they would have liked signing up to it.  I see that David Rothenberg (who I've mentioned here before) has become involved.  There is not a lot of recent news online, though perhaps people are busy working on their compositions rather than unveiling things in advance.  There are a few video clips on the project site, including one of Paul Barton playing Beethoven an upright piano to four elephants eating a pile of yams (performing classical music to rescued elephants in Thailand is what he does).  It would be a pity if the reputation of Beethoven and the (over)familiarity of the Pastoral Symphony put people off making more musically interesting interpretations for the project.

Given the link this initiative makes between environmental destruction and the Pastoral Symphony, I thought it would be appropriate to conclude here with a clip from Soylent Green (1973) - the scene in which Sol Roth (Edward G. Robinson in his last role) lies listening to the music as he is about to die.  He has chosen euthanasia rather than live any longer in the polluted hell that the planet has become in 2022.  But before he dies, he watches a montage of vanished nature, landscapes he remembers from his youth that nobody will ever see again...