A dark and desolate place 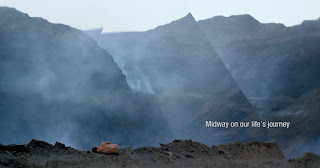 ... it seems to me that I had a dream
And in that dream
I am suddenly woken up by
the fracas of deafening explosions.
I open my eyes
on infinite smoke and fog.
The incandescence of the ground
under my feet reveals to me that
I am in a dark and desolate place.
With one glance around me I discover
That I have arrived at the edge
of the well of hell. 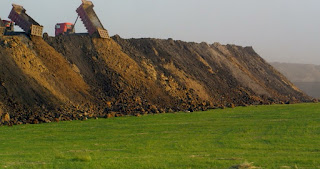 Zhao Liang’s documentary, Behemoth (2015), on environmental destruction and the blighting of lives in Inner Mongolia, is consciously modelled on Dante's The Divine Comedy.  The black pits created by mining and the fiery furnace in which men toil, shaping lumps of metal, certainly resemble Hell. Later in the film we see the grey industrial Purgatory that has arisen where once the steppe was verdant grassland.  Finally, in a brilliantly ironic touch, we reach Paradise: the ghost city of Ordos, built by developers with the materials that have caused so much suffering to extract, but empty of all life except a solitary street cleaner.  Zhao, interviewed for the Walker Art Centre by someone with the appropriate name of Bosch, said he read The Divine Comedy whilst making the film.  At several points we see a 'guide', walking ahead with a mirror on his back, reflecting the landscape. 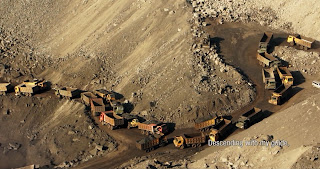 A review of the film for The Guardian points to some obvious visual reference points:

'Panoramic shots of the mines, and the termite trail of trucks that crawl down the side of these gouged-out wounds in the land, evoke iconic photographs by Sebastiao Salgado of the Serra Pelada gold mine in Brazil. There are also parallels with the work of Edward Burtynsky, whose large-format shots of factories and industrial blight were the subject of Jennifer Baichwal’s documentary Manufactured Landscapes, and with Dorothea Lange’s seminal portraits of Americans displaced by the Great Depression.'

Some critics have felt that Zhao could have given the workers more of a voice, rather than simply filming them as they worked and later, trying to wash away the filth of the day. But Zhao told The New York Times that he didn't need "to introduce the background of each person specifically. All we know is that this is a group of people who’ve been tossed about on earth and in the end they didn’t get anything. Their bodies are worn out and the environment is damaged. That’s all.”

Footnote: the lines quoted at the start of this post I found on a movie script site.  I could have used the slightly different English version in the subtitles for the film, but the translation seems less good.
Posted by Plinius at 10:29 pm