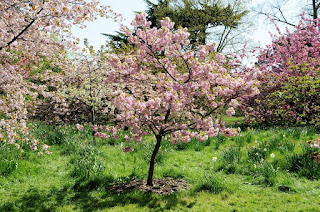 Last weekend at Kew Gardens the cherry trees were in full bloom.  It prompted me to organise for last night a small blossom viewing gathering at our house (we actually have a crab apple tree, but it's a perfectly good stand-in).  During the week, the weather had turned from bright sunshine to wind and showers, so our tree, though still in bloom, had begun to shed its petals over the lawn.  I didn't really mind.  There was plenty of sake and good conversation to be had inside and spring rain is, in any case, almost as frequently encountered in Japanese poetry as cherry blossoms, sometimes in the same poem.  A 9th century poet, Ōtomo no Kuronushi, asked whether the gentle rains of spring are tears shed for the scattering of the cherry blossoms.

I have written here before about blossom viewing in Japan, but today I thought I would highlight one particular party, held as long ago as 730.  In the first month of that year (February 8th by the Western calendar), Ōtomo no Tabito, the Governor-General of Dazaifu, invited guests to a gathering in his garden to see the plum blossoms, whose flowering precedes the cherry season.  The tanka poems they composed feature in Edwin A. Cranston's anthology The Gem-Glistening Cup.  He describes their verse as 'decorous expressions of the pleasure of being together in spring, along with the occasional twinge of anxiety that spring will not last forever.  The principal images are plum blossoms, green willows, warblers, and wine.  The tone is celebratory, shadowless as the diffused light of a spring day.'

The poets at the gathering were mostly obscure, just the local talent in a remote outpost (Dazaifu is on the southern island Kyushu, far from the Japanese capital of Nara).  Their poems are simple and generally lacking in artifice.  The participants are identified by their job titles - a junior secretary, a senior judge, an assistant governor, a 'master of computation' etc.  Here is one of the poems, in Cranston's translation, written by the host himself.


In my arbor now
Petals scatter from the plum -
Or is it snow
That floats down drifting over us
From the boundless sky?

This is one of several poems comparing blossom and snow; it is an example of 'elegant confusion', a technique taken from Chinese poetry.  Later in the sequence one of the other guests, Tanabe no Makami (identified as 'Clerk of Chikuzen') adds mist to this poetic equation.  As his contribution could be classified as landscape poetry I will conclude by quoting it here too.


Over spring fields
Mist rises, spreads across the ground,
And snow sifts down -
Or so we see it as we watch
Plum blossoms scattering.