Landscape of the Megaliths

In British Art: Ancient Landscapes, a catalogue published last year for an exhibition at The Salisbury Museum, Sam Smiles describes the history of artistic engagement with Britain's ancient stone circles and chalk figures.  It goes roughly as follows: 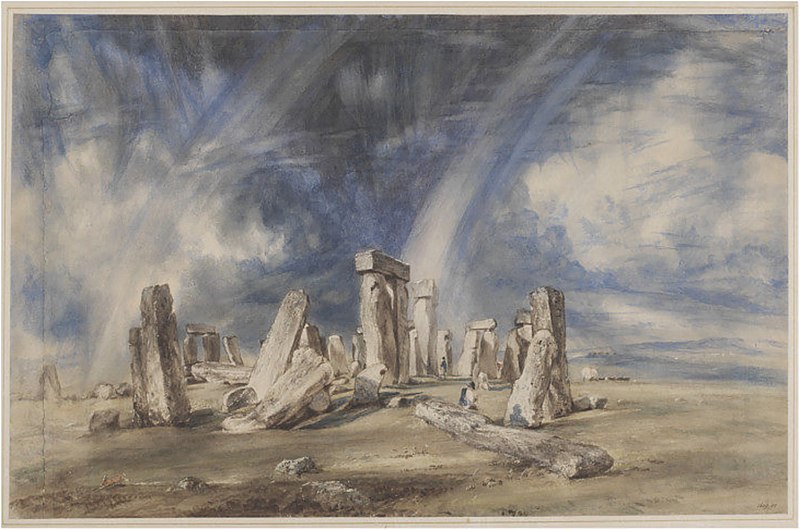 After putting a link to this post on Twitter, the excellent @BL_prints alerted me to a Sam Smiles piece on their blog, which tells the story above up to the early nineteenth century.  Here's a brief extract for you, his final two paragraphs, with an image from the BL website.

The aesthetic presentation of prehistoric structures was most successful when their massiveness and monumentality was heightened by the artist’s approach. The topographer John Britton recruited very capable artists to illustrate his numerous publications: the title page of the third volume of his survey The Beauties of Wiltshire (1825) includes an engraving of 1812, based on a drawing by John Sell Cotman. The subject is the cromlech on Marlborough Downs known as the Devil’s Den and the impact of the image relies on close focus, a low horizon and a stormy sky. 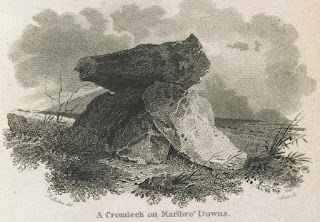 This tendency to exaggerate the sublimity associated with these monuments, concentrating on their enigmatic, even weird presence in the landscape, ran the risk of removing them from topography completely. The key instance of this approach is probably JMW Turner’s watercolour of Stonehenge, engraved in 1829 for Charles Heath’s Picturesque Views in England and Wales (1827–38). Turner had visited the site at least twice, in 1799 and 1811, and had studied it carefully. His watercolour, however, sacrifices detail for theatrical effect as Stonehenge becomes the setting for a spectacular thunderstorm, with sheep killed by lightning, their shepherd struck down and his dog howling at the sky. Here, then, topography’s ideal of the accurate record surrenders almost completely to the artistic impulse.

Glad you liked the book.