This snow has never melted 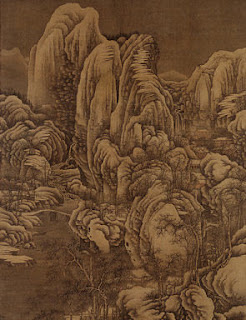 Mount Omei, or Emei, in Sichuan province, is one of the Four Sacred Buddhist Mountains of China and has often featured in Chinese poetry.  Li Po spent the early part of his life (before 725) in Sichuan and wrote a 'Song of Mount Omei's Moon', that would later be quoted by Su Shi in one of his own poems.  Su Shi was actually born near the foot of the mountain, in 1037, but spent his life being moved from one post to another, getting further and further away until he eventually found himself living on the island of Hainan (he died, back on the mainland, four years later).  Fan Ch'eng-ta, one of the 'Four Masters of Southern Sung Poetry', specialising in the field-and-gardens genre, described Mount Emei in his Diary of a Boat Trip to Wu (1177).  The higher he got, the colder it was - intensely so at night.  Reaching Brilliant Cliff he looked down into the clouds and glimpsed halos of coloured light.  Further on he could see the mountain range that stretches West, until it eventually becomes the Himalayas:


'Lofty, rugged, carved, sliced; scores, perhaps a hundred peaks in all.  When the rising sun first illuminates them, the snow glistens like shiny silver, shimmering in the light of the dawn.  From antiquity to the present, this snow has never melted.  These mountains extend all the way to the land of India and to tributary kingdoms along the border for a distance of I don't know how many thousands of li.  It looks like it is spread out on a table before one.  This spectacular, unique, unsurpassable view was truly the crowning one of my entire life.' 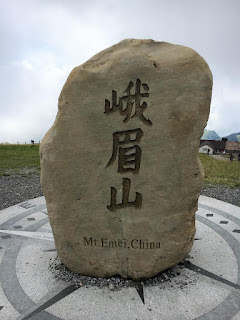 Last month I was surprised to encounter a fragment of Mt Emei, perched on the summit of a mountain in Switzerland.  This 8 ton lump of basalt, the Emei Stone, was installed on the top of Mt. Rigi in 2015, a year after a Rigi Stone was 'inagurated' on Mt Emei.  They are meant to 'symbolise the cultural and touristic collaboration' between the two mountains.  An explanatory board refers to these landscapes like global corporations, with the exchange symbolising 'the valuable and long-standing partnership between RIGI and EMEI.'  I had not been to Switzerland for a while and was surprised by the number of Chinese tour groups.  There are visitors too from other parts of Asia.  At the bottom of Mount Titlis, a high, snow-capped peak near Rigi, you encounter the inviting smell of Indian street food on sale at the Spice Bistro.  And at its summit, you can take a selfie with cardboard cutout stars of the famous Bollywood film Dilwale Dulhania Le Jayenge (1995), which was set in Switzerland (though not actually on Titlis).  The appeal of the Alps for Bollywood directors is discussed in an article for The Smithsonian and the Indian fascination with Switzerland is explored in an interesting piece by Anuradha Vikram's for Hyperallergic.

Mount Rigi became a major tourist destination in the nineteenth century, in part because it is easy to get to from Lucerne.  A Telegraph article on this phenomenon made the connection with Turner's Blue Rigi, a centrepiece of the Tate's 2014 Late Turner show (looking back I see I wrote at the time about Turner's Italian landscapes rather than the exhibition's views of the Alps).  Rigi developed a special appeal, and


'so great was this charisma, that within a couple of decades of Turner’s visit, a stay in Lucerne and an ascent of The Rigi were among the most desirable experiences for any traveller to Continental Europe. In 1857 the first grand hotel opened at the summit, and by 1860 there were 1,000 horses and numerous guides and sedan chairs stationed at the foot of the mountain in Weggis. The highlight of Thomas Cook’s first group tour to Switzerland, in 1863, was an ascent of The Rigi to watch the sunrise, and in 1868 Queen Victoria herself came here, to be carried up to the hotel in a chair, and woken before dawn for the same view.

Mount Emei has a much longer tradition of tourism than Mount Rigi, centred on its temples and the 'silver world' - a sea of clouds - visible from its summit.  In the Qing Dynasty, the poet Tan Zhongyue named ten scenic attractions, including 'Blue Sky After Snowfall on the Great Plateau', 'Crystal Waters and Autumn Winds', and 'Felicitous Light on the Golden Summit'.  Today, the UNESCO World Heritage site acknowledges the threat posed by visitor numbers ('there are numerous drink stands and souvenir stalls which detract from the natural atmosphere of the mountain'), but also notes that 'as a sacred place, Mount Emei has benefited from a long-standing and traditional regime of conservation and restoration.'


A thousand years ago, back in the Song Synasty, Fan Ch'eng-ta's does not mention encountering any other sight-seers.  Perhaps he had the view to himself.  Turner never tried making the ascent of Rigi, possibly put off by the prospect of tourists.  In J. M. W. Turner: A Wonderful Range of Mind, John Gage suggests that 'it may be that he felt the Rigi was already too popular a vantage point, and he did not want to share his experiences with the two or three hundred other tourists who were said to congregate daily on the summit for the dawn.'  Gage quotes an earlier traveller, Henry Matthews, who did make the ascent and what he saw is reminiscent of Fan Ch'eng-ta's vision of dawn on Mt. Emei.  Matthews found it a 'magnificent spectacle' and concluded that experiencing a sunrise on Rigi 'forms an epoch in one's life, which can never be forgotten.' 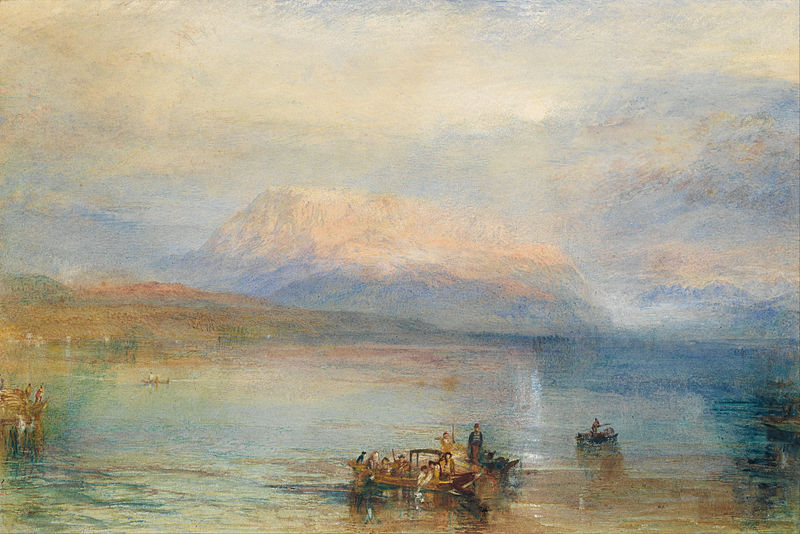