The Panorama of Thun 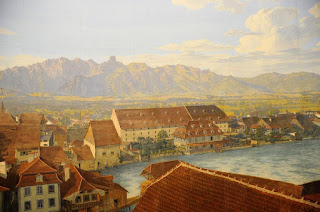 Whilst it is obviously true that any landscape painting loses something in reproduction, this is especially true of a panorama.  It is not just a question of losing the aura of the original artwork; there is the simple optical fact that a rectangular image in a book can give no idea of the experience of a large-scale panorama.  At the Thun Panorama, now housed in a purpose-built building in Schadau Park on the edge of Lake Thun, you can buy a framed reproduction for 95 Swiss Francs that is shrunk to such an extent it barely resembles the 360-degree view you have just seen.  And there is definitely an aura too that no postcard could convey.  This panorama may not have been considered High Art, but it is completely unique as a precious record of the city of Thun at the beginning of the nineteenth century.  It took Marquard Fidelis Wocher (1760-1830) four years to paint and survived the passage of two centuries only with some luck.  It is the oldest surviving panorama in the world. 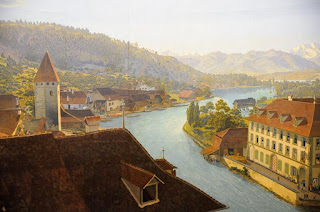 The modern visitor can feel a connection not just with the original artist as they surveyed a scene now long gone, but with all the viewers who came to see it, in its purpose-built building in Basel.  Many views of Thun and the surrounding Alps were painted for tourists to take home as personal souvenirs, but this single work, intended as a destination in its own right, was as unique as the landscape it depicted.  More so perhaps, because it shows one moment, frozen in time.  Some panorama painters like Thomas Girtin tried to avoid including human activity since the immobility of figures would reduce the verisimilitude of the illusion.  Wocher had no such qualms.  According to Bernard Comment in his book The Panorama, 'no fewer than 360 figures are shown' (was this number deliberate?)  Wocher's people going about their business on the streets and his cats sitting on the rooftops add to the charm of the painting.  This is the sort of town you can imagine a young wanderer coming to in a Romantic story, pausing for a moment as the late afternoon sun begins to gild its towers and soften the outlines of the distant mountains. 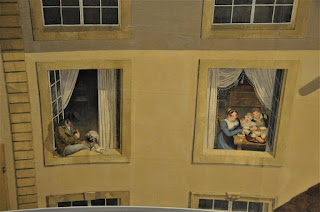 The Thun rotunda, built in 1961 to display this panorama after its rediscovery, is criticised by Bernard Comment for bringing the spectator too close to the canvas and failing to screen off the artificial light source.  However, these defects do allow you to see the details of Wocher's painting more clearly.  In Stephen Oettermann's book The Panorama, he notes that its original dimensions were smaller than became customary later in the nineteenth century.  Apparently some visitors to the first panoramas felt dizzy: 'observers adjusted their eyes to the illusion of distant vistas, and then when they walked around on the platform, it seemed as if they were wearing seven-league boots and covering vast distances with each step.  People became disorientated and likely to stumble.  (This effect can still be experienced at the panorama at Thun ... it has a diameter of only thirty-seven feet).'  This recalls to mind the famous Romantic novella Peter Schlemihl's Miraculous Story, published in 1814, the year Wocher completed his panorama.  Schlemihl, shunned by society after selling his shadow to the devil, seeks solace in nature, wandering the world in seven-league boots.  Perhaps if you look carefully enough you will see a shadowless figure somewhere in the Panorama of Thun. 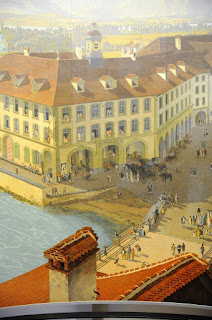 Images from my own visit to the Thun Panorama
this month - photography is permitted
Posted by Plinius at 12:43 pm