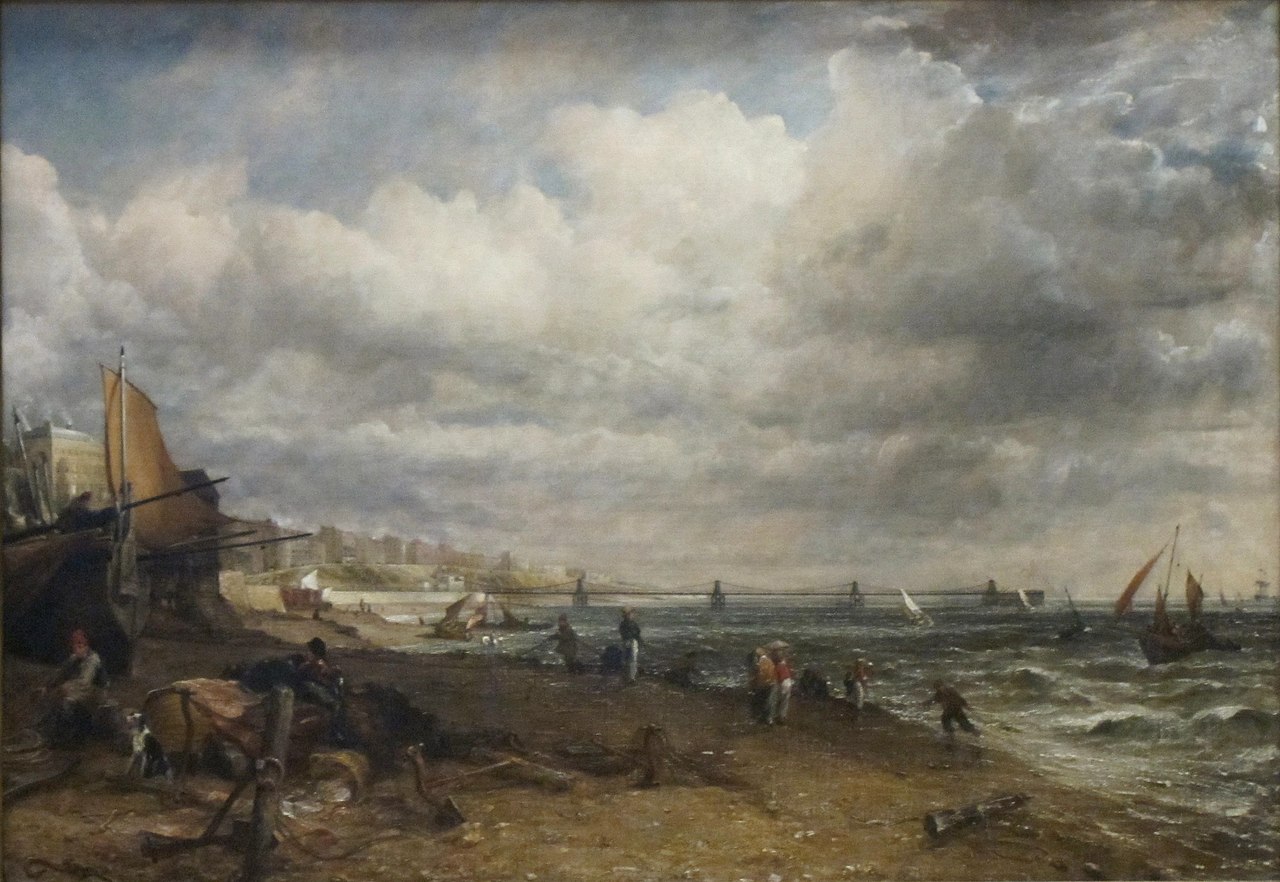 Turner versus Constable...  You can compare the two greatest figures in British landscape art directly in their paintings of the Chain Pier at Brighton - Constable exhibited his at the Royal Academy in 1827 and Turner began work on his a year later.  Why did they both tackle this motif?  The answer relates to the pier itself which was completed in 1823 to facilitate a new steam packet service: a key investor was the great art patron, Lord Egremont.  Constable made a detailed sketch during his first visit to the Brighton in the summer of 1824 - the delay in completing a finished work may have been because he was busy catering for the new market that had opened up in France, following his success at the 1824 Salon.  At this time Turner was also at the peak of his fame, but a decade earlier he had fallen out with Egremont, hitherto his greatest supporter.  They were reconciled though in 1827 and Turner was invited to stay at Petworth House, where he painted a series of marvellous sketches (I have included one of them here previously).  Among the full-scale landscape paintings he completed there is the painting of the pier below, which can still be seen at Petworth.  It includes one of the steamboats from Dieppe which Egremont's investment had helped facilitate.

In an essay for the exhibition Constable and Brighton, 'Taking on the Chain Pier - and Turner', Ian Warrell notes that Constable emphasises the traditional fishing trade and omits any reference to the steam packet service, but Turner too partially obscures the steamboat behind a group of fishermen. 'Turner fully accepted, welcomed even, the inevitability of technological progress.  But such advances are invariably represented in a way that tugs the emotions for what is passing away, or in danger of being superseded.'  Signs of Brighton's rapid urban expansion are evident in Turner's view, in the new buildings stretching along the coast and in the pollution represented by some discarded vegetables floating in the water (bottom right).  These vegetables inevitably prompted comment, being at eye-level for diners in Petworth's Carved Room. 'However, rather than disagreeing head-on about the desirability of their presence, the tactful Egremont chose to challenge the likelihood that the vegetables would float (something that was then tested, using real vegetables, in a bath tub.' 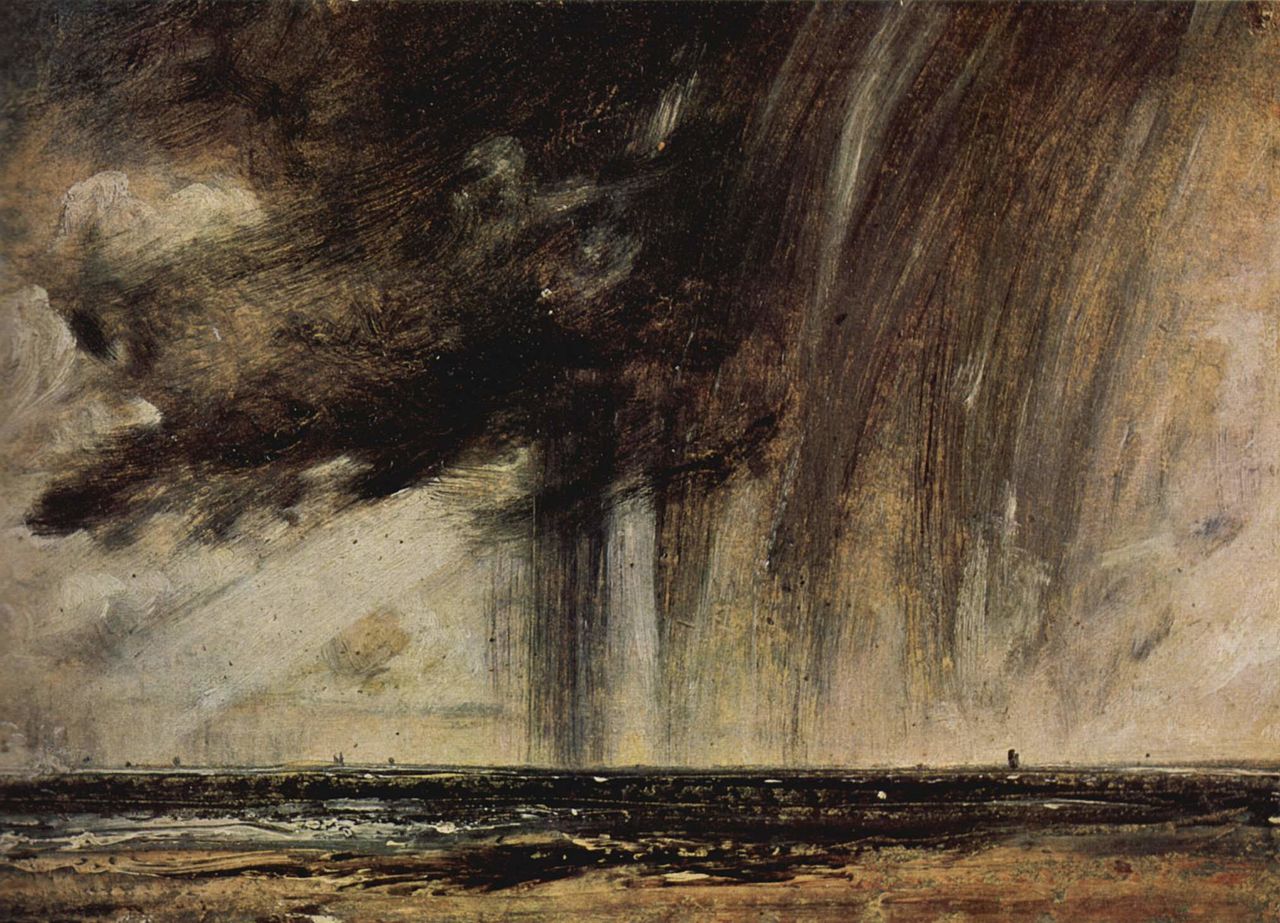 The exhibition includes other paintings of Brighton beach by both artists, such as Constable's dramatic oil sketch of a rainstorm.  It also traces the walks Constable made along the coast and onto the Downs, where he sketched the windmills (a particular interest for the son of a mill owner).  Brighton Museum have even produced a leaflet 'In Constable's Footsteps' suggesting a walking route.  The exhibition itself was prompted by the recent identification of the exact house Constable rented in 1824.  A painter who now lives there and who did some of the research into Constable's whereabouts has been given the opportunity to show one of his own paintings in the exhibition (on the evidence of this it was, I think, a wise decision to restrict him to one painting, in contrast to the kind of joint show I mentioned on Saturday in my previous post).  Constable's paintbox and gold medal from the 1824 Salon are on display alongside his paintings, and there is also a small toy stage coach which, according to family legend, kept Constable's children amused on the journey down to Brighton. We didn't try taking our own children to this exhibition but I would certainly recommend it, along with the excellent catalogue.
Posted by Plinius at 7:09 pm