The ruins of Karnak 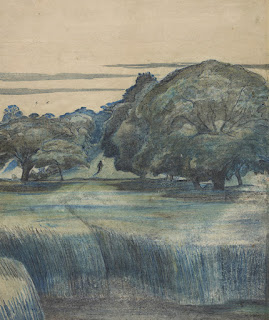 The British Museum currently has an exhibition of British landscape watercolours which focuses on the period 1850-1950, the century after the Golden Age.  It includes familiar names that I have often featured here - Samuel Palmer, John Ruskin, James McNeill Whistler, Paul Nash (see above). There are also landscapes by artists more usually associated with other genres - John Singer Sargent (society portraits), Anna Airy (war workers), Hubert von Herkomer (depictions of the poor).  And there are the somewhat forgettable Victorian artists with their double names - Alfred William Hunt, George Pryce Boyce, Edward John Poynter - whose picturesque views are painted beautifully but don't stick in the mind very long.  One of the things you realise from this show is how many now-rather-obscure artists were renowned at the time and made a fortune from their paintings.  I made a note of one nice winter scene by William Russell Flint, who you would be forgiven for not having heard of, even though he was knighted in 1947 (according to Wikipedia he 'enjoyed considerable commercial success but little respect from art critics, who were disturbed by a perceived crassness in his eroticized treatment of the female figure.') 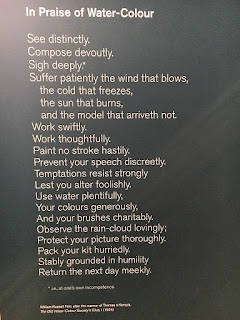 William Russell Flint quote (after Thomas à Kempis) from 1924,
on display at the Places of the mind: British watercolour landscapes 1850–1950


The British Museum has been collecting watercolours for a long time - the exhibition includes one painting by Francis Towne that was part of his bequest in 1816.  Some parts of its collection have never been seen publicly before, including one work by an artist about whom very little is now known, Henry Stanier.  According to the Guardian, 'the long-awaited public showing comes 113 or so years after the death of the artist' (who was waiting for it they don't say - perhaps we all were, without knowing it).  Kim Sloan, this exhibition's curator 'discovered the huge watercolour in an obscure corner of the museum more than 10 years ago, when she was looking for the original frames for some Turner watercolours.  To her astonishment she found not just empty frames, but three paintings by Stanier, an artist she had never heard of. They appear to have been stashed away in the 1950s without ever being recorded in the museum’s collection.'  The unearthing of this view of the temple complex at Karnak sunds almost like an act of archaeology.  Karnak itself continues to yield new finds a century after Stanier was there and you wonder how much else there is to find in the recesses of the British Museum.
Posted by Plinius at 4:09 pm