The Pink and White Terraces

Earlier this month news came in that the lost terraces of Lake Rotomahana had been discovered.  The Pink Terrace (Te Otukapuarangi - 'the fountain of the clouded sky') and the White Terrace (Te Tarata - 'the tattooed rock') were three quarters of a mile apart, each a descending sequence of pools formed by silica in the water that welled up from geothermal springs.  Having first been described by a European traveller in the early 1840s, they become a major tourist attraction for visitors to New Zealand; but in 1886, following an eruption of Mount Tarawera, they disappeared.  Two researchers now think the terraces may lie preserved under mud and ash and are assembling a “team of the willing” to explore the site.  However, in its report The Guardian cautions that another team thought they had found the terraces in 2011, and only last year GNS Science New Zealand concluded that most of them had been destroyed.

Some photographs were taken of the terraces (see below), but our main idea of what they looked like comes from the paintings of Charles Blomfield (1848-1926).  He began making landscape views in the North Island in the 1870s and the sketches he made of the Pink and White Terraces were source material for paintings long after the landscape had been buried.  Contemporary travel writers felt the inadequacy of words to convey the form and colours of what was before them.  In The Australian Abroad (1879) James Hingston was unequal to the task of describing Te Tarata: 'we had better stop until we get the shade of J. M. W. Turner, that great painter of the mystic, to assist us.'  However, as Lydia Wevers says in Country of Writing: Travel Writing and New Zealand, 'like many travel writers who apostrophise the indescribability of the terraces, Hingston proceeds to describe them for several paragraphs.'

In 1877 the prolific travel writer and painter Constance Gordon-Cumming visited Lake Rotomahana (her account can be read in Chapter XXV of At Home in Fiji).  The White Terraces were 'in nature what the Taj Mahal at Agra is in architecture, — a thing indescribable — a fairy city of lace carved in pure marble, — a thousand waterfalls suddenly frozen and fringed with icicles.'  The next day she took in Te Otukapuarangi and 'got a large very careful drawing from the ridge overlooking these terraces, with our tent and the white terraces on the other side of the lake.'  Lydia Wevers criticises the proprietorial birds-eye view Gordon-Cumming adopted in her sketches and the very Victorian attitude of colonial entitlement evident in her writing.  After painting the landscape she got into a dispute over whether a payment should be made to the local Maori (they had been asking £5 for a photograph and thought paintings would warrant a higher fee). 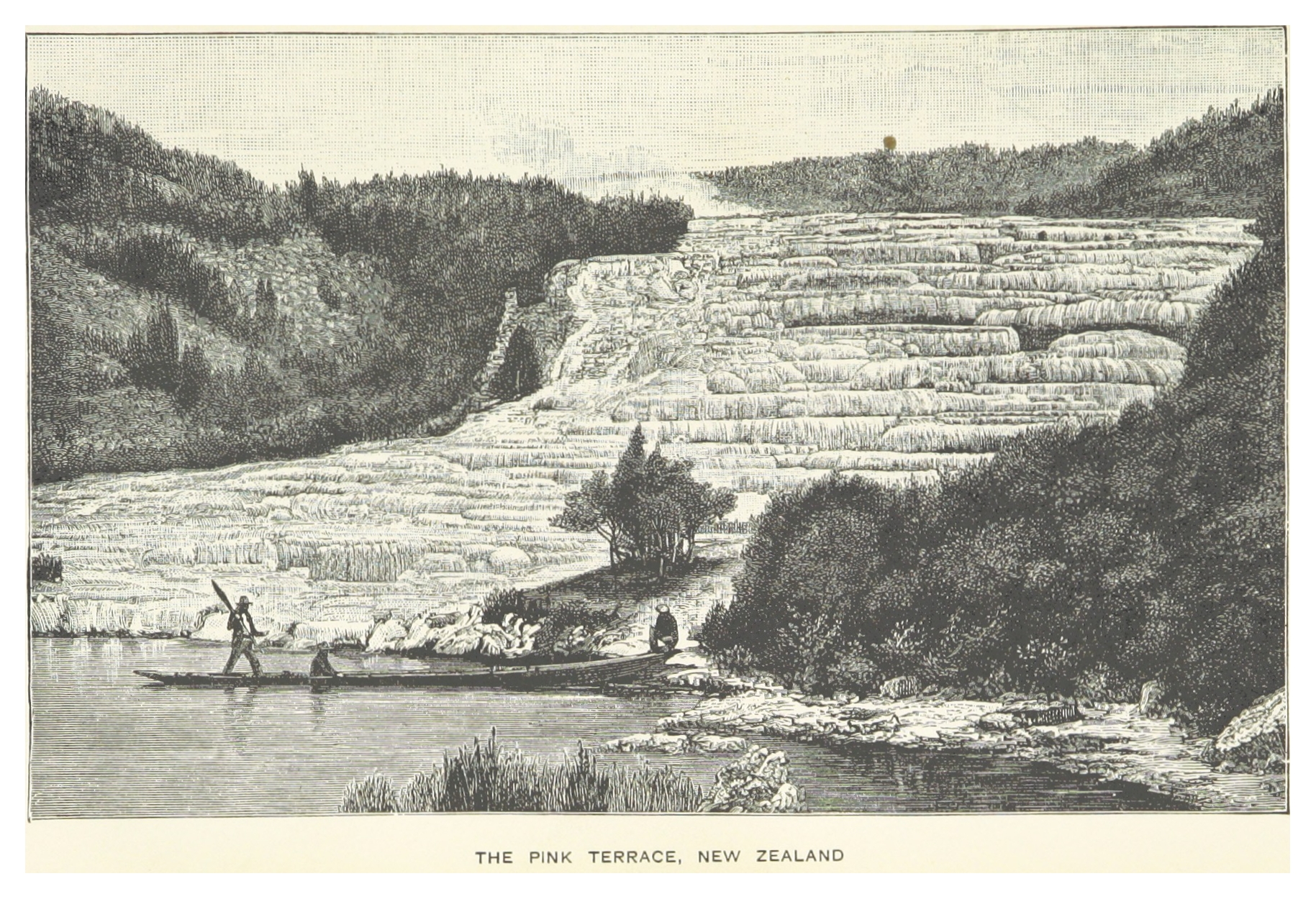 The Pink Terrace, New Zealand
from Oceana, or England and her Colonies by James Anthony Froude (1886)
Source: Wikimedia Commons

Before this unpleasantness over money occurred, Constance Gordon-Cumming had been relaxing in the waters of the Pink Terraces.  You can see from a description like this why people would be motivated to try to find them again, though surely their original magic would be unrecoverable:


'Rock and water are alike smooth and warm and pleasant, and you can prolong the delight of the bath to any extent, passing from one pool to another, sometimes receiving a gentle shower as the sparkling drops trickle from the overhanging rim of a pool, perhaps eight or ten feet above you, or else lying still in passive enjoyment, and watching the changing lights that flit across lake and hill, and all the time the kindly water is coating you with a thin film of that silica which makes the bath so smooth and the bather so silky'

I will conclude here with another description of this experience from perhaps the most famous visitor to the terraces, Anthony Trollope.  He was there in 1873 and remarked on the shell-like appearance of these natural pools, in which 'four or five may sport ... each without feeling the presence of the other.'


'In the bath, when you strike your chest against it, it is soft to the touch. You press yourself against it, and it is smooth. You lie upon it, and though it is firm, it gives to you. You plunge against the sides, driving the water over your body, but you do not bruise yourself. ... I have never heard of other bathing like this in the world.' 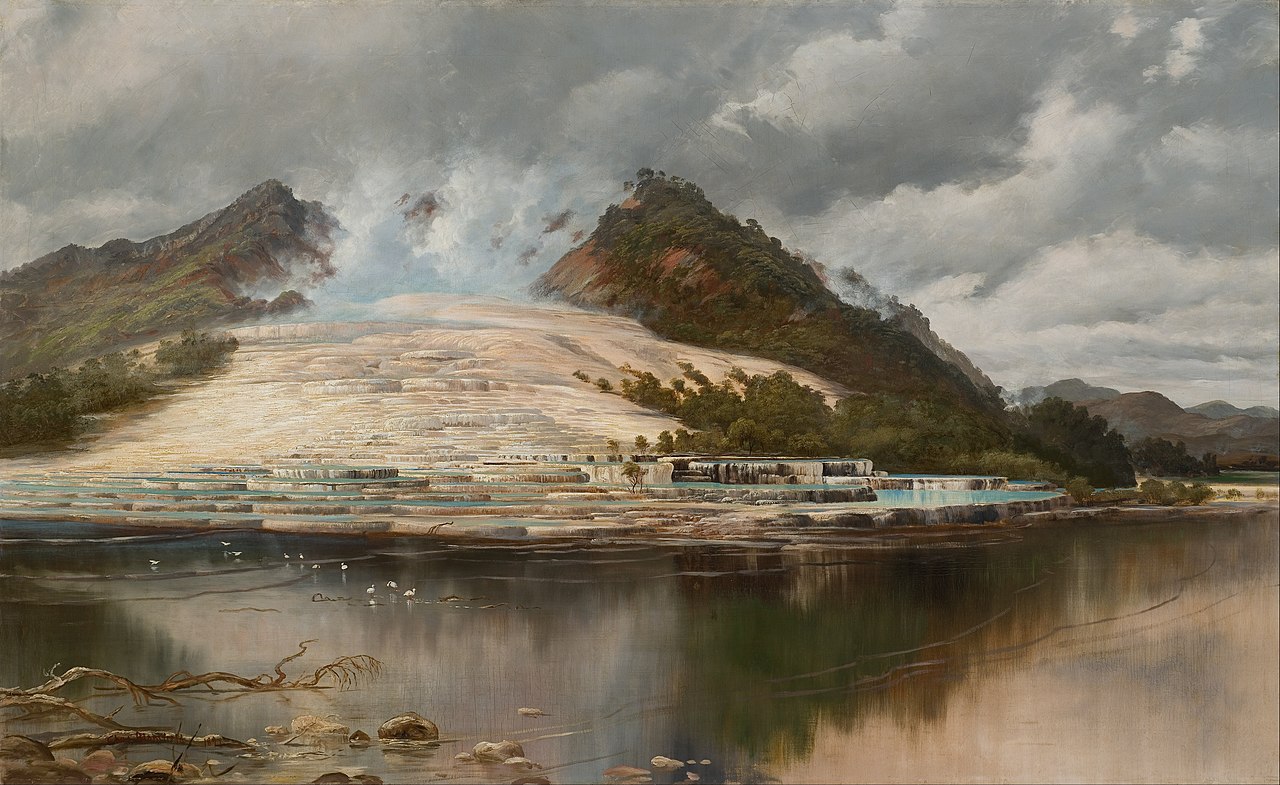