When the two essences of nature are bright and clear 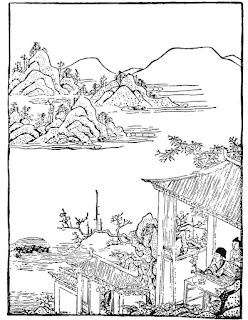 A scholar playing the guqin, Ming Dynasty
Reproduced in R. H. van Gulik's The Lore of the Chinese Lute

I have written here about guqin music twice before: once in relation to two compositions of the Song Dynasty by Kuo Mien (Guo Mian) and more recently in a post about the Japanese guqin player, Uragami Gyokudō.  Here I am adding some more information on landscape and the art of the guqin via some quotations from the seminal Western book on the subject, R. H. van Gulik's The Lore of the Chinese Lute, first published in 1940.  This essay explains the evolution of the instrument into one of the scholar's most important possessions.  Artists and writers often depicted the poet wandering through mountains, accompanied by his lute, usually carried by a servant boy, so that he could play when moved by the beauty of the scenery.  Even when indoors, the lute player's 'mind should dwell with forests and streams'.  But ideally he would be outside, 'near an old pine tree, admiring its gnarled, antique appearance. In the shade of the pines some cranes should be stalking, and the lute player should admire their graceful movements, modelling on them his finger technique.'

Here is a lovely sixteenth century description of the place of the lute in scholarly life.  Its subject is Ni Tsan (Ni Zan, 1301-74), the great Chinese landscape painter who I have referred to several times on this blog.


'Where Ni Tsan dwelt there was the Ching-pi pavilion, breathing an atmosphere of profundity and remoteness from earthly things.  There he had assembled several thousand books, all of which he had corrected with his own hand.  On all sides there were arranged antique sacrificial vessels and famous lutes, and the abode was surrounded by pine trees, cinnamon trees, orchids, bamboos, etc.  It was fenced off by a high paling of poles and bamboo, suggesting aloofness and refined delicacy.  Every time the rain had stopped and the wind had abated, Ni Tsan used to take his staff and wander about, just going where his steps led him. When his eye met with something which particularly struck him, he played his lute, thus finding aesthetic satisfaction. Those who saw him then knew that he was a man who dwelt outside this world.'

An enviable life - I particularly like the way he 'corrected' the books in his library!  Playing the lute was seen as an almost priestly ritual: it could only be undertaken under the right circumstances.  The Lore of the Chinese Lute quotes a list from the Ming period in which over half of the fourteen rules relate to making music outdoors.  The lute may be played:


Finally here, I will highlight van Gulik's subdivision of the lute repertoire into five thematic groups: (1) The Mystic Journey; (2) Tunes of a Semi-Historical Character; (3) Musical Versions of Literary Products (e.g. poems from the ancient Book of Odes); (4) Tunes Descriptive of Nature; (5) Tunes Descriptive of Literary Life.  Elements of landscape may be evoked in any of these categories, but it is the fourth group that is of most interest here.  One such composition is the Song Dynasty tune I described here previously, 'Clouds over the Hsiao and Hsiang Rivers'.  Another is 'High Mountains and Flowing Waters' (for the story of Po Ya, to whom it was ascribed, see my earlier post).  This exists as two separate pieces, one of which, 'Flowing Waters', is now the best known qin composition  - a version was sent into space on the Voyager golden record (see clip above and, for more information, John Thompson's incredibly informative qin site).

The third example of nature description van Gulik gives is by Ts'ai Yung (Cai Yong 133-92), a polymath of the Eastern Han period whose daughter also became a renowned poet and musician.  It is a tune which evokes in nine sections the end of winter and the coming of spring. A Ming Dynasty lute handbook says of this that 'it takes its inspiration from the snow, describes snow's purity and freedom from all earthly stains, and expresses contempt for the world and elevation to empty clearness'.

Thanks for this. An intriguing glimpse into a subject area I know very little about. Am now listening to some more Lui Pui-Yuen

The writer I mention at the end of this post, Ts'ai Yung, didn't live long enough to be involved in the battle portrayed in Woo's film (fought in the winter of 208/9). Ts'ai was the leading writer at the court of Tung Cho (Dong Zhou) and died in prison in 192 when Tung was overthrown by an alliance that included the warlord Ts'ao Ts'ao (Cao Cao). It was Ts'ao Ts'ao who would go on to take power and then suffer spectacular defeat in 'Red Cliff'. (He was also responsible for rescuing Ts'ai's daughter Ts'ai Yen after she had been abducted, but that is another story).

The actual music in 'Red Cliff' was recorded by Zhao Jiazhen. There are lots of clips of her on line - e.g. playing 'Flowing Water'.