The voice of the north wind sad 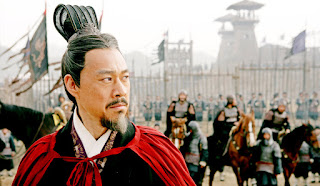 In a post earlier this month I referred to the musical duel in Red Cliff, John Woo's epic film about  events at the end of the Han dynasty, based on 'the Iliad of China', The Romance of the Three Kingdoms.  The composer/writer I discussed there, Cai Yong, only briefly features in The Romance of the Three Kingdoms and doesn't appear in Red Cliff, but here I want to focus on Cao Cao, the great warlord at the heart of the story, whose army is defeated spectacularly in the movie.  Cao Cao was himself a renowned poet and wrote a famous poem just before the Battle of Red Cliff.  You can see him recite it in the clip from YouTube below - a scene from the 95-episode Chinese TV dramatisation Three Kingdoms.  This moment has often been depicted in art - there is a painting in the Long Corridor of the Beijing Summer Palace, for example, and I have reproduced below a Japanese ukiyo-e print showing Cao Cao composing the poem in a boat, with the moon rising and crows wheeling in the sky. 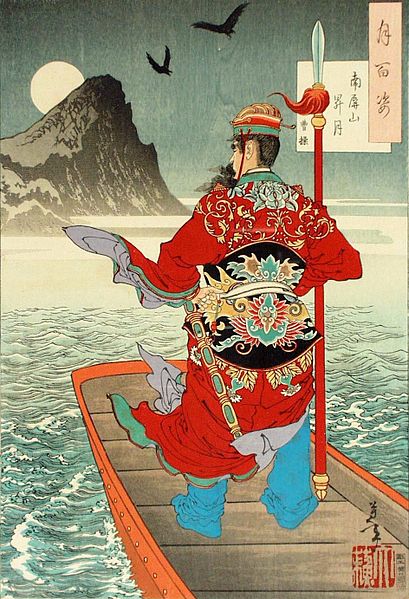 
The real reason for mentioning Cao Cao on this blog is not his eve-of-battle composition, but a beautiful short poem 'Viewing the Ocean', which is an early example in world literature of pure landscape poetry.  Here are the first six lines in Burton Watson's translation; the Jieshi (Chieh-shi) mountains overlook the Bohai Gulf.

Other translations of the full poem can easily be found online (there are two on a Chinese Poems site for example).


Another poem of Cao Cao's that has stayed with me over the years (since reading it in Burton Watson's The Columbia Book of Chinese Poetry) is the 'Song on Enduring the Cold'.  This was probably written in 206 when Cao Cao was leading his troops across the Tai-hang mountains to attack a rival.  Taken out of context though, it could simply be a description of an arduous mountain journey - 'stark and stiff the forest trees, the voice of the north wind sad.'  The poem ends with a literary allusion, to 'that song of the Eastern Hills', a 'troubled tale that fills me with grief.'  It is a reference to a song in the Classic of Poetry (No. 156), attributed to the Duke of Zhou.  He had also been on a military campaign in the East, over a thousand years earlier, c. 1040 BCE (as distant from the time of Cao Cao as we are from Charlemagne).  I'll end here with the refrain from this ancient poem, repeated at the start of each verse (trans. Stephen Owen):

We marched to those eastern mountains,
streaming on and never turning.
And now we come back from the east,
in the pall of driving rain.