The rocks of Fårö

'My ties with Fårö have several origins.  The first was intuitive. This is your landscape, Bergman.  It corresponds to your internal imaginings of forms, proportions, colours, horizons, sounds, silences, lights and reflections.  Security is here.  Don't ask why. Explanations are clumsy rationalisations with hindsight. In, for instance, your profession you look for simplification, proportion, exertion, relaxation, breathing.  The Fårö landscape gives you a wealth of all that.' 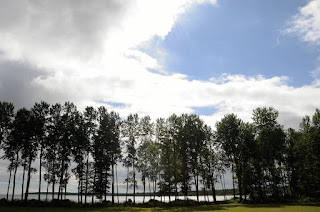 View from the Bergmancenter on Fårö

This notion of finding ones ideal landscape is an interesting one and prompts me to wonder what my own might be.  Bergman spent much of his life in theatres and the island of Fårö, with its rocks and trees and open skies, seems at first to be a very different kind of space.  But as he says here, it suited his outlook on directing as well as the deeper need for a retreat which we often see in creative artists.  Bergman was only persuaded to visit Fårö in the first place when Svensk Filmindustri requested that he consider an alternative to Orkney as a setting for Through a Glass Darkly (1961).  He made three more films there, along with two documentaries about life on the island and the TV series Scenes From a Marriage (1973), which led to an upsurge in the Swedish divorce rate and was apparently an inspiration for Dallas.

It might be thought that Bergman filmed more often on Fårö than he actually did because rocky coastal settings are so associated with his work.  In a post I wrote just after he died I referred to the chess game on the beach in The Seventh Seal, but this was made four years before he had set foot on the island.  I was only able to quote a description of Fårö then; now I have been myself and walked, for example, the windswept shore at Langhammars, with its strange rock formations, that Bergman used for the final scene in Shame (1968).  In this the couple – Liv Ullman and Max Von Sidow - wait for a boat which they hope will take them and other refugees away from their war-torn country.  The film ends with them adrift in a grey featureless sea. 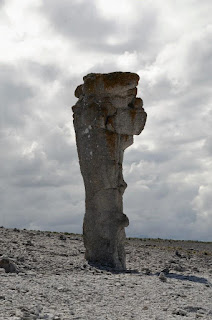 Perhaps another reason we associate Bergman so strongly with Fårö is the continuing fascination with Persona, which is I think, after The Seventh Seal, his most famous and iconic film (both are parodied in Woody Allen’s Love and Death).  Fårö's Bergmancenter currently has an exhibition marking its fiftieth anniversary.  Among the exhibits are Liv Ullman’s camera, Bibi Andersson’s shades and some atmospheric behind-the-scenes colour photographs of a film that is hard to imagine in anything other than beautifully-lit black and white.  Sadly it is not possible to visit the actual house used in Persona, situated on the rocky eastern shore of Fårö, where the troubled actress played by Liv Ullman withdraws from the world.  This no longer survives. 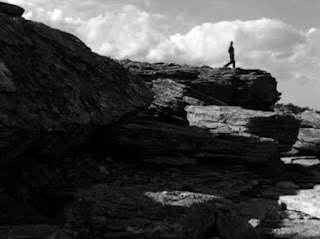