Light on the reservoir 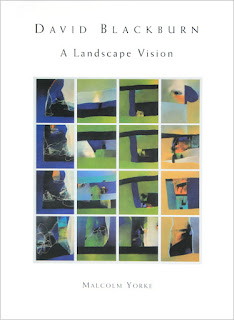 I have not yet read any obituaries in the national media for David Blackburn, whose passing was reported last month in the Huddersfield Examiner.  This may just be a matter of time, although perhaps he is not as well known now as he once was.  There has always been a sense that he was swimming against the main currents of contemporary art, with his visionary abstract landscapes executed in pastel.  Perhaps the praise he received from Kenneth Clark whilst still a student didn't help in this respect, although a quote still appears on the front page of the artist's website. Writing in 1990, Malcolm Yorke pointed out that though Blackburn had achieved a strong international following, he had not 'courted the fickle attentions of the London galleries.'  I used to see small exhibitions of his work at the Hart Gallery, a little oasis among the crowds on Upper Street in Islington (now closed, and recently in the local news when squatters took over the premises).  More recently he has been represented by Messum's, who in 2005 made the hour-long documentary David Blackburn Landscapes of the Mind.  This includes contributions from another famous son of Huddersfield, Simon Armitage, as you can see from the slightly unfortunate thumbnail image below, where he is caught in mid-gesticulation.


Although the Hart Gallery was much more welcoming than a West End gallery, the paintings on sale were sadly beyond my means.  I recall wondering though whether the rich colours that draw you into Blackburn's images might eventually start to pall.  What did intrigue me was the way both individual pictures and composite works were constructed.  Sometimes he would mount a set of landscape studies to form a composite vision of a place, where each view remains ambiguous, poised between abstraction and the actual forms of trees, mountains, bodies of water.  Malcolm Yorke likened these grids to film stills or the panels on an altarpiece.  In this article (published in Modern Painters) he described the process of exploring a David Blackburn picture:


'A landscape can appear domesticated until you notice the tiny sun-dot in the sky, which suddenly throws the scale switch and the fields become vast as prairies.  On the other hand gross, misshapen, orange suns have recently begun to overwhelm the skylines of the hills they are supposed to set behind.  Blue stands for both sky and water, and, since we have no clouds or waves or reflections to guide us here, we might be disconcerted to find that it is water occupying the top third of the picture, not sky.  We must remember the artist's fondness for flying and take off with him.'

These ambiguities appeal to Simon Armitage, who (unlike me) does own some David Blackburns and talks about them in the film I have embedded above. One of these pictures had seemed to him to be an aerial view of fields, but, as he says in the film, "a few months ago I was driving back, not far from David's actually, near Blackmoorfoot Reservoir, almost on eye level with the reservoir, and it was something to do with the light in the evening, on the top of the reservoir, that made me realise that that could well be what's happening in the picture." And so the image changed into a vision of water.  This mutable quality is what Kenneth Clark identified as the essence of David Blackburn's art:


'People ask: What is his work like? I don’t know any artist to whom I can compare him. He is not a landscape painter, not an abstractionist in the ordinary sense of the word. He is a painter of metamorphosis.'

The day after I wrote this an obituary appeared in The Daily Telegraph.