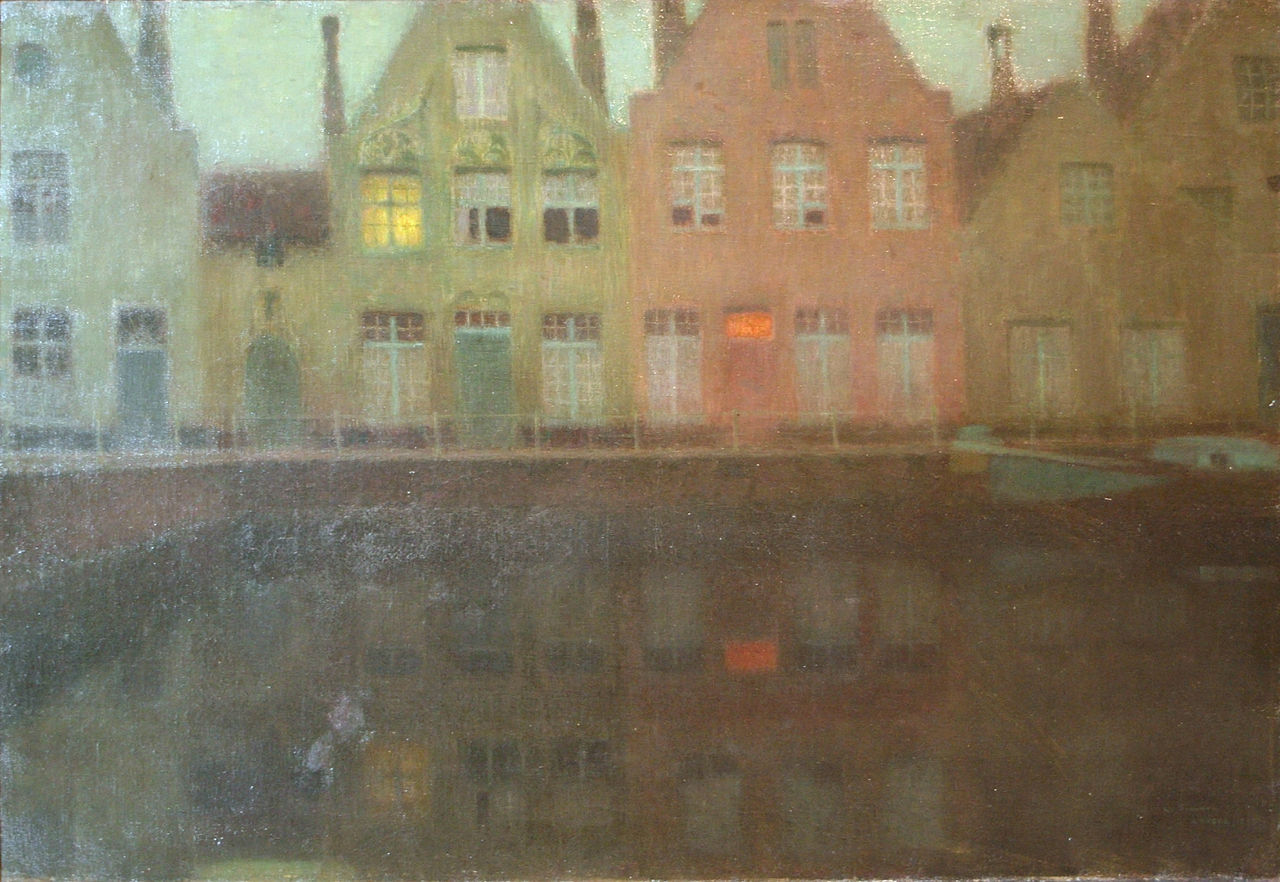 When landscape reflects the emotions of a fictional character it is usually through some mood of the weather, but sometimes there is a more profound connection, when a location is sought out because it resonates deeply with a particular state of mind.  This is the case in Bruges-la-Morte (1892), the short Symbolist novel by Georges Rodenbach, whose bereaved hero finds solace in the melancholy streets of the old medieval city.  Bruges, Rodenbach says in his preface, 'establishes a powerful influence over all who stay there.  It moulds them through its monuments and its bells.'  In an essay he published three years earlier, The Death Throes of Towns, (included in the Dedalus edition I am quoting here), Rodenbach decribed the city as stricken by a kind of consumption.  The cause of this was the silting up of the waterway linking Bruges to the sea, isolating it economically and leading to its slow decline.  The essay ends with a memorable passage in which the city's mute pain mirrors that of a troubled soul.  In Bruges,


'one gradually submits to the creeping counsel of the stones, and I imagine that a soul, bleeding from some recent, cruel sorrow, that had walked amidst this silence, would leave that place accepting the order of things - not to live any longer - and, beside the neighbouring lake, sense what those gravediggers of Shakespeare said of Ophelia: it is not she who goes to the waters, but the water which comes to meet her grief.'  (Translated by Will Stone.)

A 2005 article in Frieze describes Rodenbach's use of photographs in Bruges-la-Morte, which could be seen as prefiguring Andre Breton's Nadja and the writings of W. G. Sebald.


'The images were taken from the picturesque local stock of prints and postcards sold to tourists; they picture a city almost wholly uninhabited. Occasionally, minute figures in the distance have even been excised, so that these photographs, in 1892, are already outdated, resembling daguerreotype city views of half a century earlier, with their vanished or blurred citizens.

'For the most part these photographs of deserted squares, looming bell-towers and impassive façades have been left out of subsequent editions of Rodenbach’s novel, as though they added a touch of distracting realism to his dreamlike narrative. The opposite, in fact, is the case: where the story merely reflects the lurid expectations of the writer’s Parisian audience, the photographs reveal an act of grand deception — the Bruges they depict is in many places an architectural concoction of the 19th century, a renovation further finessed by the photographers’ choosing to leave out the incidental evidence of modern life. In an inexplicable twist to this tale of trompe-l’oeil medievalism the latest edition of the book, from Dedalus Press, has replaced the original images with 23 new photographs taken by the translator: once again the ‘real’ town has been carefully cropped out.' 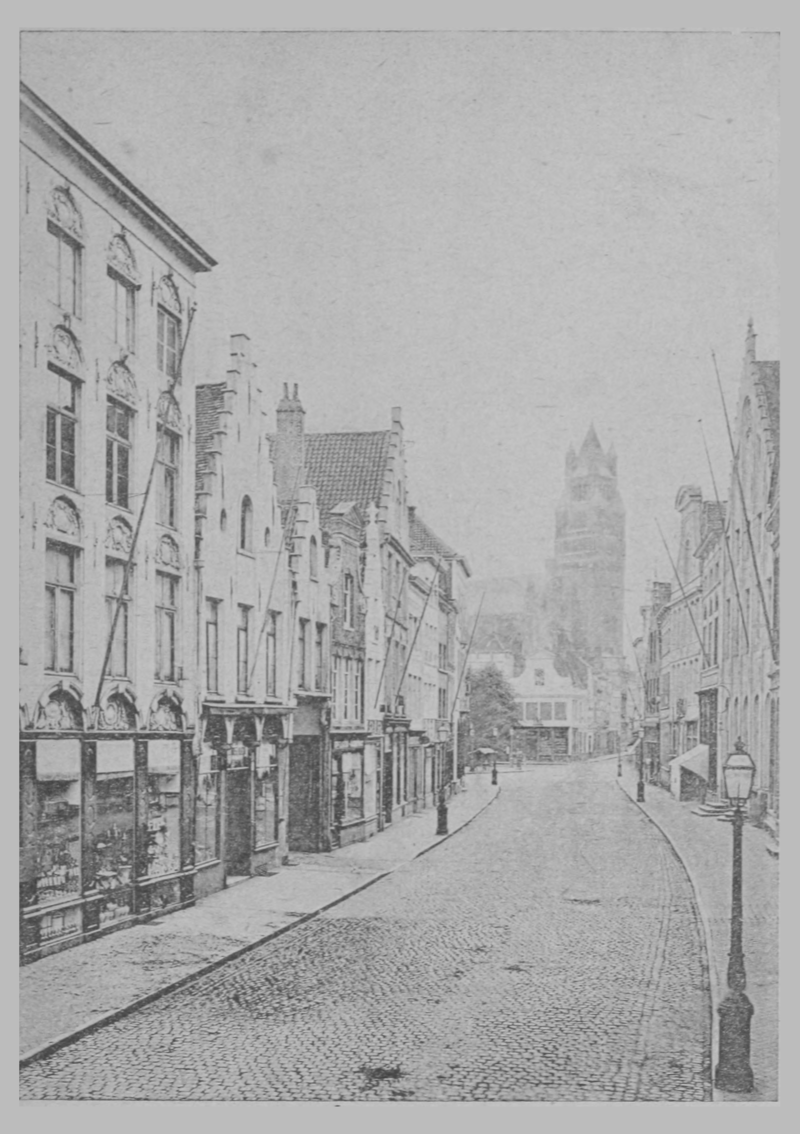 I have been looking back at some old photographs I took in Bruges almost exactly a century after the book's publication, but even with some careful cropping I don't think they would convey a sense of melancholy (I should have risen earlier perhaps, before the tourists, when the streets were empty and autumn mist still hung over the motionless canals).  A modified version of Bruges is the basis for one of the most remarkable images drawn under the influence of Rodenbach, Fernand Khnopff's The Abandoned Town (1904).  Here too there is an absence of people and even the statue is missing, leaving just an empty plinth.  An incoming tide is starting to cover the stones of the Woensdagmarkt.  Instead of having been separated from the sea, the city here looks as if it is being flooded and abandoned to the waters.

Frances Fowle's essay 'Silent Cities', in Van Gogh to Kandinsky: Symbolist Landscape in Europe 1880-1910, describes Rodenbach's influence on artists like Khnopff and Henri Le Sidaner (called the Rodenbach of painting by one critic).  Knopff, she says, 'spent part of his childhood in Bruges, which he described as 'truly a dead city, unfrequented by visitors'.  As an adult he allegedly wore opaque dark glasses while travelling through the city, so as not to confuse his memory with modern reality.'  She notes however, that visitors had been drawn to Bruges before Rodenbach, including Holman Hunt and Rossetti, whose poem 'On Leaving Bruges' describes its grey towers under a sunless sky.  Baudelaire too had been there and called it a 'ghost town, a mummified place that smelled of death and the Middle Ages.'

After Rodenbach, more writers of 'dead-city-prose' emerged (a type of writing it would be interesting to trace forwards and backwards from this Symbolist moment).  Will Stone mentions Camille Lemonnier and Franz Hellens, whose En Ville Morte (1906), written about Ghent, 'gives the impression that the town is literally decomposing'  Other more recent writings can be linked to Bruges-la-Morte: there is a website, Villes Mortes, which provides a list works that provide context for Rodenbach's novel.  The book has also featured on two excellent blogs which have stimulated my reading over the years: Writers No One Reads and Vertigo.  And, finally, while I'm on further reading, see also the Preface to the 2005 Dedalus edition, written by Alan Hollinghurst, which The Guardian reprinted. As Nicholas Lezard pointed out in his review of the book, Hollinghurst's own '1994 novel The Folding Star is itself a homage to Bruges-la-Morte.'
Posted by Plinius at 6:46 pm

Great. The Death Throes/Shakespeare quote is really interesting (I saw a performance of Hamlet today, though I don't recall the gravedigger saying that). Reminds me of the poem Bitumen by Karen Solie:

when you don’t go to visit the seaside, but the seaside visits you,
rudely, breaks in through the basement, ascends stairs
to your bedroom, you can’t think of it generally then.