Yesterday I watched the first of Andrew Graham-Dixon's new three-part series on Scandinavian art.  He has begun it in Norway, crunching through the snow in a parka and discussing some artists I've featured here before: Munch, Dahl, Balke.  In one hour he couldn't include everyone (no Kitty Kielland) but I was interested in the story of Lars Hertervig (1830-1902), whose traumatic move from a poor farm on the west coast of Norway to the city of Düsseldorf, where his sponsors sent him to study at the Arts Academy, was likened by Graham-Dixon to the shock of Norway's transition from rural backwater to modern state.  One day, Hertervig, who had fallen in love with the beautiful daughter of his landlady in Düsseldorf, was told that a rendezvous had been arranged with her.  But when he arrived to meet her he found no one there but a bunch of bullying, mocking students.  This practical joke contributed to a depression which led him to return to Norway, where he was placed in the asylum at Gaustad.  After eighteen months, 'incurably insane', Hertervig went home to his family.  There he began to paint again.  Two examples of this new style were discussed in the programme: the first (above) shows a crag emerging from boiling clouds above a mirror of water; the second (below) is stranger still, a vision of what might almost be a prehistoric landscape. 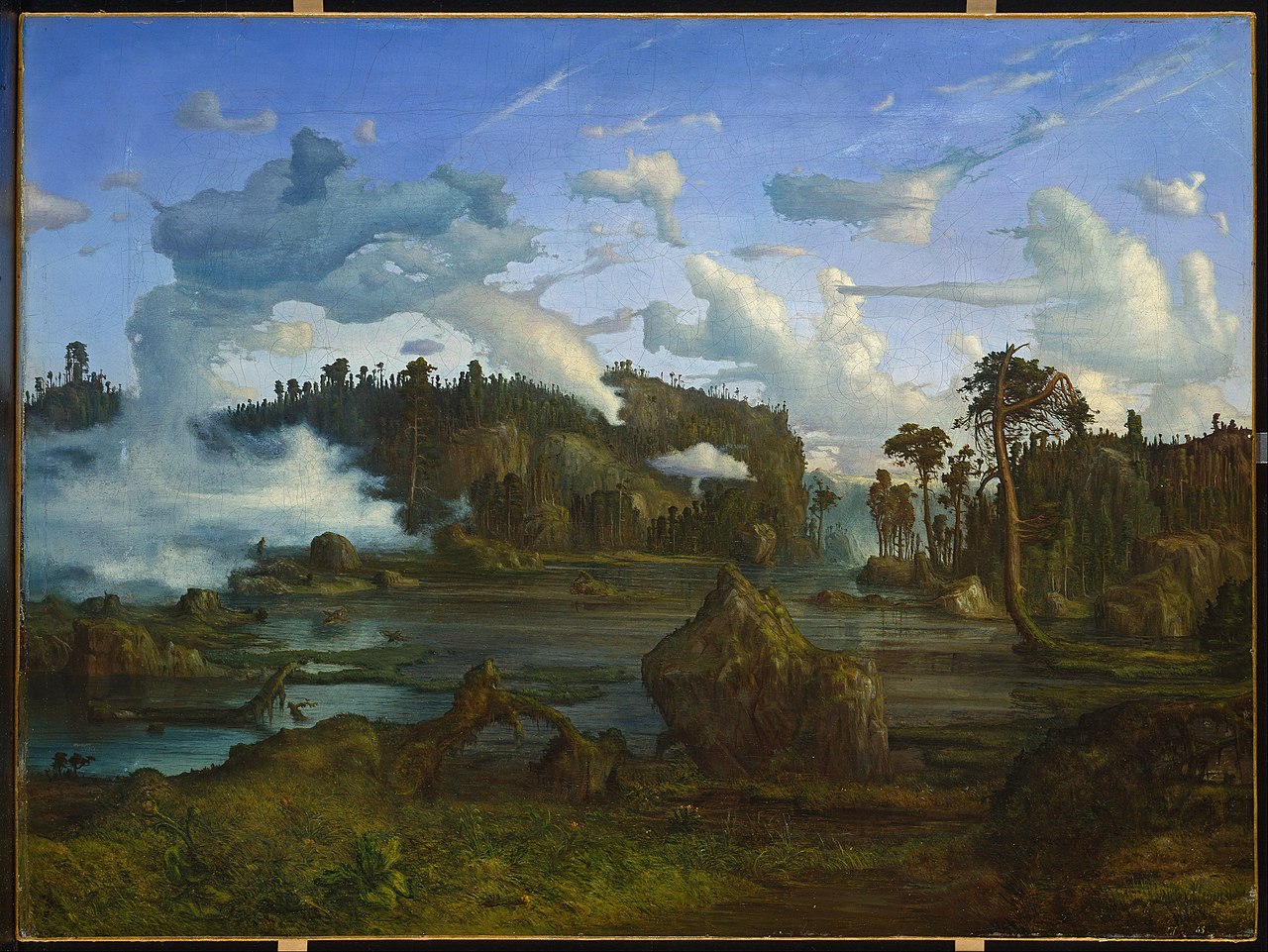 Here is what Andrew Graham-Dixon had to say in front of The Tarn:


"Looks at these clouds.  There's nothing else like this in all of nineteenth century landscape painting. It's almost as if the landscape itself has gone mad, been provoked into these paroxysms of movement and gesture.  It's almost as if you are looking into the mirror of a troubled mind. The landscape itself has a tremendously primitive, ancient feel about it.  To me it's almost as if Hertervig is attempting to summon up or capture that sense of the landscape that's always been there in the Norwegian soul, whether in the soul of the Vikings or the Christians who followed.  And together with that there's a kind of fear present in it all.  A fear perhaps that just as this landscape might almost be on the point of reverting back to some primordial waste, that there is no meaning, there is no purpose, there is no pattern to the natural world.  The world simply is there."

I have never seen the Tarn River so the words used (tremendously primitive, ancient, fearful) may or may not be an accurate reflection of what any artist would have found. Let alone a depressed artist.