Song of the Forests 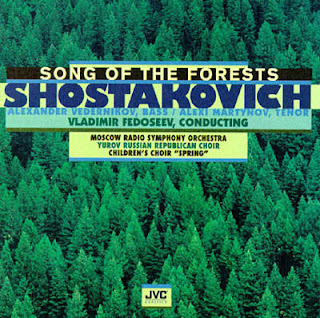 I have often written here about music inspired by landscape, but the Song of the Forests is an oratorio dedicated to the reshaping of landscape.  It was by written by Dmitri Shostakovich in the summer of 1949 to celebrate the forestation of the Russian steppes.  A year earlier he had been denounced for formalism.  Living in fear, he took to waiting on the landing by the lift each night for the anticipated arrest, as Julian Barnes describes in his new novel The Noise of Time.  While Shostakovich composed serious work 'for the desk drawer', the Song of the Forests was written to help secure his rehabilitation.  It was a setting of what Barnes calls 'an enormous, windy text by Dolmatovsky' that referred to Stalin as The Great Gardener.  'Under Stalin, the oratorio insisted, even apple trees grew more courageously, fighting off the frosts just as the Red Army had fought off the Nazis.  The work's thunderous banality had ensured its immediate success.'


This was not the only collaboration between Shostakovich and the poet Yevgeniy Dolmatovsky.  In 1951 they wrote 'The Motherland Hears, The Motherland Knows' which Yuri Gagarin whistled on his descent to earth ten years later, making it the first song performed in space.  An article on Dolmatovsky in a journal dedicated to Shostakovich mentions more of his work, including songs that were popular during the war.  In his memoirs Krushchev said he'd been inspired by 'The Song of the Dnieper' which describes the river filling with the blood of the Fascists (you can hear renditions by the Red Army Choir on Youtube).  Shostakovich and Dolmatovsky continued working together and met for the last time just before the death of Shostakovich in 1975.  Apparently Shostakovich said to him "You know, The Song of the Forests was really about protecting the environment - a subject the whole world is talking about now.  We hit the nail on the head!"'  Forty years later we are still talking about it, but as Hannah Ellis-Peterson wrote last year, the contemporary relevance of the Song of the Forests may have more to do with politics than the environment.
Posted by Plinius at 12:08 pm