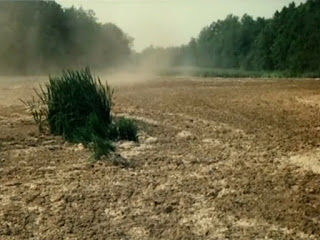 I seem to have written rather often about Andrei Tarkovsky on this blog, but perhaps it's not so surprising - how many other directors made two major films about possibly-sentient landscapes?  Last week I went to watch one of them, Stalker, at the BFI Southbank, where there is currently a 'Mirroring Tarkovsky' season.  It is some years since I last saw the film - this was the first time since having read Geoff Dyer's book about Stalker, Zona (2013), which was fun to turn to again after seeing the film.  One scene I had forgotten about is where the three men have come to a temporary halt on their journey and the earth seems to undulate like waves.  In my memory of Stalker the landscape of the Zone was mysterious but entirely free of any special effects.  This strangely rippling ground prompts from Dyer a couple of the many humorous digressions that make up much of his book and which some readers will find self-indulgent (on quicksand and LSD trips).  But he also provides the interesting background information that this footage came from an earlier stage of filming, when there were more science fiction elements than appeared in the final cut.  However, he doesn't fully explain what is going on here...


'The little islands of grass do not ripple.  The trees in the background do not ripple: it's just the boggy-looking dried earth that ripples and then, gradually, stops rippling.  How does Tarkovsky do this, how does he achieve these effects?  Or are they not effects?  Was it simply luck that he came across a patch of ripply quicksand and then it started snowing where, a few seconds earlier, it had been dusting and blossoming?  Is this part of the random magic of cinema that Herzog discovered in a sequence of footage shot by Timothy (Grizzly Man) Treadwell?  Treadwell plunges into and then out of shot, leaving the camera to record only the wind-whipped bushes and foliage. 'In his action-movie mode Treadwell probably did not realise that seemingly empty moments have a strange beauty,' Herzog explains as the bushes and trees bend and sway in the wind as if in unconscious homage to Tarkovsky*.

'* Or, of course, to Herzog himself, specifically the famous epigraph - 'Don't you hear the terrible screaming all around you?  The screaming that men call silence' - and shot of wheat swaying in the wind at the opening of The Enigma of Kaspar Hauser.' 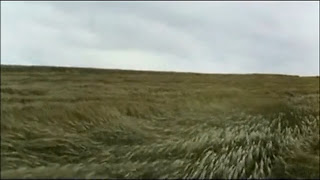