The landscape has an antique stillness

For the past week I have been immersed in the Catalan landscape described by Josep Pla in his remarkable book, The Gray Notebook.  The NYRB Classics site explains how it was written:


'In 1918, when Pla was in Barcelona studying law, the Spanish flu broke out, the university shut down, and he went home to his parents in coastal Palafrugell. Aspiring to be a writer, not a lawyer, he resolved to hone his style by keeping a journal. In it he wrote about his family, local characters, visits to cafés; the quips, quarrels, ambitions, and amours of his friends; writers he liked and writers he didn’t; and the long contemplative walks he would take in the countryside under magnificent skies. Returning to Barcelona to complete his studies, Pla kept up his diary, scrutinizing life in the big city with the same unflagging zest and humor. Pla, one of the great Catalan writers, held on to this youthful journal for close to fifty years, reworking and adding to it, until he finally published The Gray Notebook as both the first volume and the capstone of his collected works.' 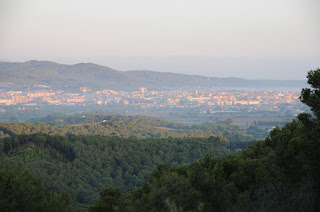 If you're interested in an overview there is a New York Times review; here I will of course focus on Pla's descriptions of landscape, illustrated with a couple of photographs I took.  To give you a flavour (it would be tedious to quote too much out of context), here he is on the afternoon of 7 May 1918, walking to his family's farm, admiring 'the white Pyrenees against an immense sky' and 'a swath of pink mist the colour of seashells, the mist off the sea in the gulf of Roses ...  The rain has refreshed the green of the pine groves and the fields of alfalfa.  Everything is bronzed and gleaming.  The wheat is about to shift from green to the white, golden foam of ripeness.  The small hills undulating on both sides of the landscape - parallel to the sea - are gently luminous, alive and graceful, like a sleeping, breathing nude.'

On a subsequent walk these hills are 'as firm as the breasts of an adolescent girl from these parts' - Pla was a bookish youth, too shy to form a relationship with a woman.  His friend and walking companion Joan B. Coromina advances the theory that ones interest in women 'is shaped by the suitability of the landscape in which she moves.  There are women for many landscapes, some women are right for only one, and some women for none at all.  When the fit is right, infatuation is guaranteed, automatic, inevitable.'  Later that year 'the vines are turning gold, the pinewoods wear a thick layer of dark green and the olive trees an airy silver-gray.  The stubble in the fields takes on a granulated, reddish tone.  The whole landscape could fit nicely between a pot of honey and a bottle of rum.'  However, Pla doesn't see much 'Dionysian sensuality' in all this - it is no place for 'garlands, cornucopias, and a warm Venus with a dainty head and huge buttocks strolling through a meadow surrounded by trees wreathed in mist.  Autumn here is rather serene, linear, and never harsh but somewhat languorous, inducing a vague, bitter melancholy.' 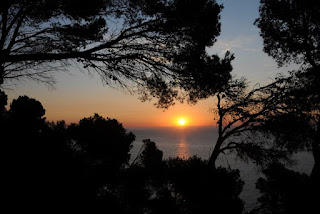 The Gray Notebook is over six hundred pages long and includes, in addition to descriptions of the countryside around Palafrugell, memorable passages on Girona in the rain and Barcelona, 'turtledove grey', laid out below him from the mountain of Montjuïc.  Re-reading some of these now I can see that they are often tinged with sadness, where for example a walk through waves of pine trees, an 'unbroken verdant sea', ends with a depressing encounter with a poor country priest (Coromina complains it "has spoiled the landscape and our stroll.  It seems incredible that such pretty countryside can contain so much wretchedness.")  I will end here though with an idyllic vision more in keeping with my holiday memories, from one of the stories Pla tells about local characters, in this case an easygoing shepherd.


'If it's hot, he lies under the soft, caressing rustle of the tall pines.  From the shade he watches the white, lathering, languid sea.  The horizon is blue and cool.  A seagull glides by flapping its wings.  The landscape has an antique stillness, at once benign and paternal.  If someone shouts, the wind carries the cry gently away.  Time passes, like a trickle of olive oil.'