'In America they call it the green flash. When the sun sets, in a very clear horizon, with no land mass for many hundreds of miles, and no moisture or atmospheric pressure, you have a good chance of seeing it. The slowest ray is the blue ray, which comes across as green when the sun sets in perfect atmospheric conditions. It’s the last ray as the sun recedes with the curvature of the earth.' - Tacita Dean, Bomb Magazine, 2006 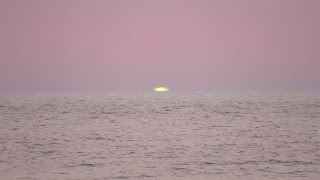 Still from one of several videos of the phenomenon that have been
uploaded to YouTube, this one by Noel Barlau


The quote above comes from a conversation with Jeffrey Eugenides, who briefly refers to the green ray in his novel Middlesex...  “They say you can’t take a picture of a green ray, but I got one. I always keep a camera in the cab in case I come across some mind-blowing shit like that. And one time I saw this green ray and I grabbed my camera and I got it.”  In the interview Eugenides asks Tacita Dean about the elusiveness of the phenomenon in her film The Green Ray.  "I think you said that you got the green ray in the film, but it never appears in any single frame. But you can see it momentarily when the film is running. Is that right?"  "Yes. The film is 24 frames a second but you can’t isolate a single frame that has it.  He goes on to ask her whether everybody sees the green ray when they see the film.  "No. That’s what’s nice about it, because otherwise the film would just be about a phenomenon. But in the end it’s more about perception and faith, I think." 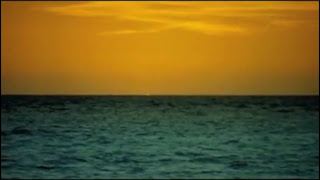 I first heard of the green ray when Eric Rohmer's beautiful film was released in 1986.  Delphine, alone on her summer holiday and nervous of any new intimacy after a split with her boyfriend, overhears a group discussing a novel by Jules Verne, The Green Ray (1882).  One of them says that "when you see the green ray you can read your own feelings and others too."  Later she sees a beach cafe named Le Rayon Vert and at the end of the film, when she finally meets an appealing young man (they both like Dostoyevsky), she asks him to sit with her and watch the sunset over the sea.  What follows is, according to Gilbert Adair in his book about the first century of cinema, Flickers, 'the tiniest and most moving special effect in the history of cinema.'  Tacita Dean was less impressed: "it’s very heavy-handed; it’s like this huge, green thing. I mean, the real green ray makes your heart miss a beat, because you look, you look, you look. And then you see it so suddenly, and it’s gone. Somehow rapidity is part of its beauty." 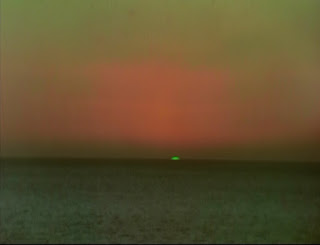 I have not read Verne's novel and it is hard to find any reviews that wholeheartedly recommend it - see for example the description on with hidden noise: 'as fiction it is sorely disappointing'.  In Jules Verne, Geography and Nineteenth Century Scotland, Ian B. Thompson describes it as the slightest of his three Scottish novels; however, it is informed by Verne's 'passion for sea travel and is meticulous in the nautical, meteorological and geographical detail of the journey.'  At the climax of the story the two lovers, having repeatedly failed to glimpse a green ray, miss seeing it because they only have eyes for each other.  Verne was clearly fascinated by the idea - in an impressive Annotated bibliography of mirages, green flashes, atmospheric refraction, etc., Andrew T. Young refers to an earlier mention of the green ray in Verne's novel Les Indes Noires (1877).  This is the earliest fictional reference in the bibliography, but the phenomenon was noted by other nineteenth century writers, like J. A. Froud, whose account of a voyage to South Africa describes a sunset on 'the sea calm as Torbay in stillest summer ... The disk, as it touched the horizon, was deep crimson. As the last edge of the rim disappeared there came a flash, lasting for a second, of dazzling green - the creation I suppose of my own eyes.'

I will end here with another art form, music.  Gavin Bryars has described witnessing the green ray in Southern California, but his 1991 composition refers back to the setting for Verne's novel.  'This part of Western Scotland is also the place where certain piping traditions originated. Male pipers practised in one cave on the seashore, females in another ( the "piper's cave" and the "pigeon's cave"). As they played their laments at twilight a triangulation, similar to that in the Verne story (male-ray-female) may well have occurred without the knowledge of the innocent participants, hence the sequence of simultaneous laments in the coda.'   The clip below is the first half of The Green Ray - I can't find anything to embed that includes the coda, with its laments for saxophone, cor anglais, French horn, and solo violin.  You can buy or hear the whole piece elsewhere of course, but perhaps it is appropriate to the theme that this should be left here to the imagination.

This was an exceptional post, really illuminating and so helpful for my research on light and the horizon - thank you!!!