Cities express the human will

'And how can it be,' asked Georges Bataille, 'that a landscape, formed of interrelated appearances without any meaning, can, according to the position of the eye, in one place be empty and without charm, and in another be a breach opened upon a dazzling world?'  Patterns in nature - laws of affinity and contrast - are enough to distract us from the void.  Even cities, 'the expression of the human will, show the opposition of the noble world of rich stone monuments and the abject and wild world of the slums.'  When we see such contrasts of light and shadow it is impossible to imagine the world as empty. 'But the screen on which light and shadow are happily composed dissipates and is decomposed sometimes as quickly as a dream-image. Then apathy, apathy without a heart and without disgust takes hold of the space occupied by the will to live — hard and cold apathy which reduces fountains, summits and beautiful landscapes to what they are.'  In this state of realisation, a man 'looks at the world of illusions with slow anger. He shuts himself into an oppressive silence, and as he places his naked foot on the humid earth, feeling himself sinking into nature and being annihilated by it, it is with anguished joy.'

At the excellent Art Cornwall Site you can read the full translation by Patrick ffrench of Bataille's text, Le paysage (1938), along with a useful explanatory note.  In this piece, he writes, Bataille is suggesting that 'our projections of beauty or horror onto the landscape, which constitute what we think of as ‘landscape’, are necessary illusions, without which man confronts a world without meaning, which rejects him, as long as he does not consider himself part of it and destined to return to it. But this identification with the earth is also disallowed him, since his consciousness of the world forever separates him from it.'  And yet Bataille concludes that there is 'a joy in being subsumed by nature, which looks forward to the moment when the thin crust of human industry will be submerged under the rising oceans of the planet ... It is from the hypothesis of such a strange perspective that the fragile constructions man has erected on the surface of the earth can be looked upon now, with ‘slow anger’.' 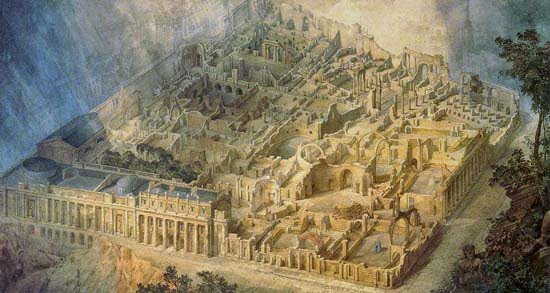 The images we are seeing on the news of towns sinking under flood water certainly underline the fragility of our constructions.  Here in London the long rains have left us largely unaffected, but the constant ebb and flow of people and the ever-changing cityscape make it feel like a 'world of illusions', built on shifting power relations and unseen channels of commerce rather than solid ground.  There is a poem by Allen Fisher called 'After Georges Bataille's 'Landscape'' in his book 'Becoming' (part of the Place sequence which he worked on throughout the 1970s).  It begins with a version of the words I quote above - 'Cities express the human will' - and describes London's transformation into the Bank of the World, its pursuit of money and the extraction of profit ('it pays / to cyanide gold').  All this activity leaves us with a greater loss, of 'love, / work and knowledge / in the light without shade.'  Whilst Bataille ends his text with a man feeling himself sinking into nature, Fisher's poem closes with the image of 'a concrete that separates city from land / laid by men unaware they will soon not breathe.'
Posted by Plinius at 10:57 am

Email ThisBlogThis!Share to TwitterShare to FacebookShare to Pinterest
Labels: cities